The Indian Wire » News » Everything You Need To Know About: Haryana Assembly Polls 2019 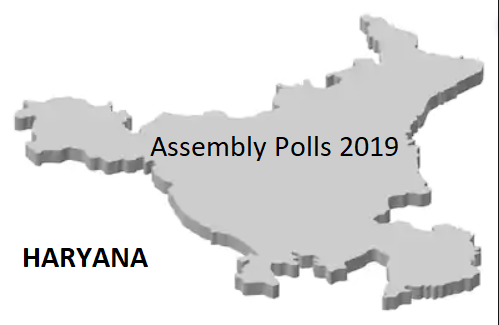 Haryana state will go to polls for its 90 assembly seats on October 21. As per the notification of Election Commission of India, the schedule for the forthcoming elections is given below-

The elections will be held in a single-phase. The elections have been necessitated as the five-year term of Manohar Lal Khattar‘s government is set to end on November 2.

“Game-changers” in the Haryana’s electoral game

Interesting competition to look out for

In Adampur, BJP has fielded its celebrity star Sonali Phogat against MLA Kuldeep Bishnoi who is a Congress candidate.

In Ellenabad, Indian National Lok Dal has fielded Abhay Chautala while BJP has announced the name of Pawan Beniwal. Bharat Singh Beniwal will fight on the Congress ticket.

In Badhra, Jannayak Janata Party has given a ticket to Naina Chautala. She will fight against Ranbir Singh Mahendra.

In Karnal, Chief Minister Manohar Lal Khattar has been fielded from the saffron party. He will be fighting for the second term. Congress has given a ticket to Tarlochan Singh while JJP has approved the candidature of Tej Bahadur Yadav.

In Garhi-Sampla-Kiloi, former Chief Minister Bhupinder Singh Hooda is taking the reins of Congress party. He will be seen fighting against JJP’s Sandeep Hooda and BJP’s Satish Nandal.

In Uchana Kalan, former MP Dushyant Chautala will fight against BJP’s Prem Lata. Balaram Katwal will be fighting from the Congress side.

Distribution of 1168 candidates across the State

The last assembly elections in the state were held on 15 October 2014. The results were declared on 19 October. Bhartiya Janta Party had won the maximum number of seats. The saffron party had secured 47 seats out of the 90 assembly seat with 33.2 percent vote-share. Indian National Lok Dal bagged the second-biggest strength with 19 seats.

There were a total of 16,244 polling booths in the elections.