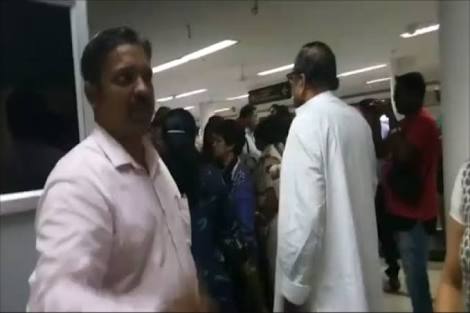 On Thursday, eight members of Trinamool Congress were allegedly manhandled and detained at Silchar Airport by the Assam Police. TMC MPs were in Assam in order to assess the situation in the state after the draft NRC was published on Monday which excluded over 40 lakh people.

TMC has aggressively condemned the Centre over the NRC draft. The eight-member team was on a two-day visit to the state and to participate in a convention against the NRC.

Kakoli Ghosh Dastidar, TMC MP told News18 that when they landed the police detained them and said ‘Section 144 was imposed in the state’. He said, “When we asked for justified documents, they were unable to show us. The Assam police chased and beat me and my colleagues Mohua Moitra, MP Sukhendu Sekhar Ray and others. We were kept confined.”

Sukhendu Sekhar Ray also alleged that they were manhandled by the police. A video which is spreading on the social media shows MLA Mohua Moitra being chased by a woman police officer.

TMC chief Mamata Banerjee enraged at the incident told the media, “A parliamentary delegation went to meet the people (in Assam). They were not allowed outside the airport. Why is the Assam government behaving like this, along with the Centre? This is a political vendetta. The BJP only has muscle power.”

West Bengal CM said, “People of Assam are panicking and the situation there is like a super emergency.”

She claimed that her party members were roughed up by the Assam police. Banerjee said, “The police have roughed up the members, even the female members. Four female MPs and one female MLA besides a state minister and our party’s chief whip in Rajya Sabha – all of them were subjected to this uncalled-for behaviour.”

Banerjee lashed out at BJP and said, “BJP is trying to threaten democracy. What is BJP trying to hide in Assam? I am very disappointed with how the MPs and media have been manhandled at Silchar airport. This situation cannot continue.”

TMC MP Derek O’Brien attacked the Centre and said, “There is super emergency. The delegation did not go to break the law. They are the lawmakers and not the lawbreakers. A woman MLA accompanying the delegation was injured. One of the MPs is a heart patient who has a pacemaker. He was pushed.”

West Bengal BJP’s chief Dilip Ghosh remarked, “They (TMC) are the problem. Who asked the TMC MPs to go there? No one else has gone there. They have gone there to spread tension and create trouble. They should come back.”