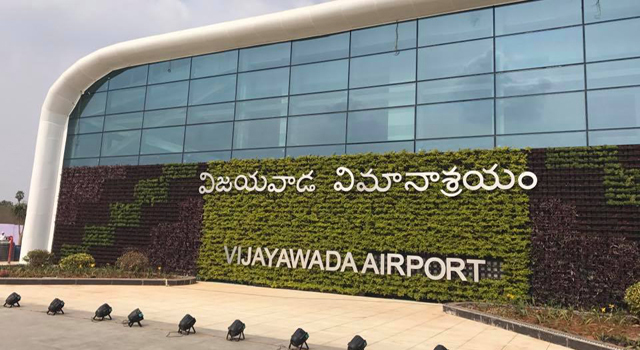 The first-ever international flight landed at the city airport on Tuesday. Vice-President, M Venkaiah Naidu laid foundation stone for the integrated terminal.
Airport authorities welcomed the maiden flight, IndiGo 6E34, with a water cannon salute.
The passengers were received with bouquets and gifts. Two of the passengers hailed from Warangal in Telangana. The flight had 90% occupancy. The fare was also very low, ranging from 7,200 to 16,000.

The Indigo airlines will operate flights from Vijayawada to Singapore on Tuesdays and Thursdays.

Vijayawada airport, though declared an international airport last year, received the first
flight on Tuesday after the state government extended financial assistance to the airline in
the form of viability gap funding (VGF). The standoff between Airport Authority of India(AAI) and the Customs has been resolved. The standoff was due to the rule introduced in 2009 where the Customs wing management payments have to be dealt by Airports Authority of India. The issue got resolved after CM  N Chandrababu Naidu sent a letter to Civil Aviation Minister Suresh Prabhu requesting him to resolve the standoff.

The move is likely to impact the air traffic at Hyderabad airport.

Union minister of civil aviation Suresh Prabhu said aviation sector is witnessing unprecedented growth level of 20% plus. He claimed that the air cargo policy would be introduced to benefit farmers by exporting product to global market.