India is known for its rich and vast cultural experiences that has attracted and spellbounded people from & across the world. However with growing urbanization and industrialization, the country has been plagued with multiple problems and an efficient waste management is one of them. It is estimated that every year 62 MT of waste is generated which will double itself for year 2030. From the waste generated, 30 percent is reused and rest 80 percent goes untreated into the dumping grounds posing health and environmental hazards. Innovation and creativity has always provided solutions where none were possible & recycling and reuse of the solid waste into beautiful artefacts and pieces is no different. A classic example of science & technology meets ecological conscience meets art and culture, the amalgamation is awe-inspiring and fascinates creators and viewers alike. And the Waste to Wonder Park is one such feat.

The Waste to Wonder park is spread over seven acres of Rajiv Gandhi Smriti Van, situated in Sarai Kale Khan.It has Nizammudin Metro station (of Pink Line) and Sarai Kale Khan Interstate Bus Terminus in its proximity. Earlier was a landfill, now sees a footfall of nearly 15K visitors since its opening. This is an initiative by the South Delhi Municipal Corporation (SDMC) and the state-run Horticulture Department as a part of The Clean India (Swachh Bharat Abhiyan) Mission.

Based on the concept of recycling and reuse for aesthetic and recreational purposes.The famous replicas placed in the park are made from recycled materials such as typewriters, appliances, old benches, metal scraps etc. sourced from 24 Municipal Corporation offices.

“The Seven Wonders Park of Kota is the main inspiration for this idea,” as shared by Puneet Goel, Commissioner at SDMC in a NDTV interview . The responses received from the thirty sculptures made as a part of ‘Waste-to-Art’ programme that are installed in various locations of Delhi , gave them a necessary push to translate it into action.

Nearabout 150 tonnes of  industrial and other forms of solid waste were used as constituents by an artistic team of five artists and seven supporting artists along with a labour force of fifty. The project took six months to complete at a cost of 7.5 Cr. for the ‘world’s first’ picturesque sculptures made out of waste.

Around the world in Delhi

The Waste to Wonder park offers an exquisite exhibition of the seven sculptures, some of which are seven wonders and others are iconic monuments present in the world. This is a collective effort of introducing edutainment in their own city, Delhi. 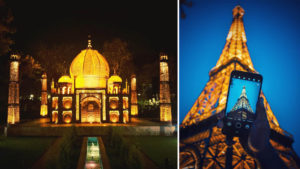 One can see sculptures of The Statue of Liberty, Christ the Redeemer, the Eiffel Tower, the Taj Mahal, the Colosseum from Rome, the Leaning Tower of Pisa and the Great Pyramid of Giza at the park. The mounds of these sculptures are built of landfill materials and adequately spaced, surrounded with greenery on its outskirts. Allowing visitors to admire one at a time which gives each artist their own share of appreciation and creative value.

The sculptures are coated with an anti-rust enamel and provided with a stone plinth containing details of both original and replica. Each have been fashioned out mainly by using scrap materials like – automobile parts, bicycle chains, old pipes, iron sheets, nuts- bolts etc. and motifs are drawn on the Taj Mahal using laser-cut technology.

The park is open from 11 am to 11 pm for weekdays with tickets price range varying for different age groups. For weekends timings and ticket prices may differ due to its increasing popularity. For the convenience of visitors even the washrooms are made from old shipping containers, painted in mural art. Further,there are talks about introducing food truck eatery which will be made from an old truck. The thematic park looks spectacular at night, well lit with sodium and LED lights that captivates visitors with a breathtaking and stunning view.

The Waste to Wonder park has a self-sustaining energy supply model, containing installations of three solar trees and solar rooftop panels installed on the roof of the washroom. Apart from utilising solar energy, it also has a windmill using wind energy to contribute towards its energy requirement. These efforts are a consolidated approach towards decreasing an overall carbon footprint and promoting the usage of non-conventional sources of energy in daily lives.

The SDMC plans to earn revenue from excess energy generated from 25 KW solar panels and 1 KW capacity windmill power, by supplying to discoms of electricity and energy corporations. In the near future, the SDMC will install five tonne bio-gas plant in the park which will be an added contribution to its energy model.

Standing tall with the pioneer of this theme, Nek Chand’s Rock Garden. India has several other initiatives highlighting waste-to-art theme such as E-waste into art installations in Mumbai, Bhubaneswar’s Waste to Art Museum, Plastic Monster near Mumbai’s Bandra Worli sea link and ‘Am I a dustbin?’ floating art display message in Surat.

“The Waste to Wonder park has earned 2.7 crore of revenue from the sale of tickets within four months of its opening,” as told by Varsha Joshi, Commissioner of the North Municipal Corporation who also holds an additional charge of SDMC to HT in an interview.This drove the SDMC to plan its next initiative called the Bharat Darshan Park which will be on the same lines and slated for commencement before year end.

With India planning to scale its recycling capacity to 50 percent in the next five years. Several such initiatives are being planned and proposed which will be eco-friendly and touristic at an affordable cost. And as a result, will inculcate and propagate sustainable living & practices in the long run.