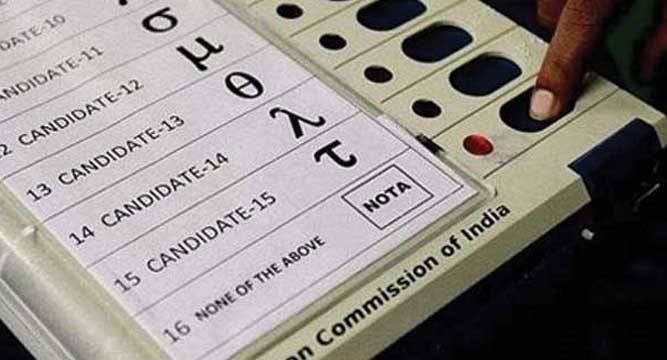 The NOTA or the ‘none of the above’ option was the sixth most popular press button in the recently-concluded Madhya Pradesh Legislative Assembly elections, after Bharatiya Janata Party (BJP), Congress and Bahujan Samaj Party (BSP). The situation was similar in other states — NOTA outperformed several political parties, including the AAP and Samajwadi Party, that contested the  State Assembly Elections in the five states.

According to the Election Commission‘s website at 6 pm on Wednesday, the NOTA votes ranged as high as 2 percent in the Chhattisgarh Assembly Elections to 0.5 percent in Mizoram Assembly elections.

In Chhattisgarh, Samajwadi Party, Aam Aadmi Party and Nationalist Congress Party (NCP) got 0.2, 0.9 and 0.2 percent votes respectively in Chhattisgarh. The Communist Party of India (CPI) got 0.3 percent votes in the state.  While NOTA bagged 2 percent of Votes!

In Madhya Pradesh Assembly Elections, NOTA bagged 1.4 percent of total votes. Whereas Samajwadi Party and Aam Aadmi Party got less than votes bagged by NOTA with 1.3 and 0.7 percent.

Notably, Bhartiya Janta Party and Rashtriya Swayamsevak Sangh had run a massive campaign on Social Media in October urge voters not to choose NOTA, because by selecting the NOTA option, a voter chooses the “available worst against the available best”.

NOTA was first introduced in 2013 based on the directive of Supreme Court in the People’s Union for Civil Liberties versus Union of India judgment. India was the 14th country to introduce negative voting.