The Election Commission of India, on Thursday, announced the dates for holding by-polls in two Rajya Sabha Seat – one from Uttar Pradesh and another one from Rajasthan. According to the polls office, the voting to elect a new Parliamentarian for the Upper House in both the state will be held on August 26.

The Poll Commission further added that the counting of votes for the by-polls will be done soon after the voting on August 26.

Former Samajwadi Party Rajya Sabha MP Neeraj Shekhar, son of former Prime Minister and socialist leader Chandra Shekhar, was elected to the Rajya Sabha after he unsuccessfully contested the Lok Sabha Polls 2014 from Ballia Parliamentary Seat. Shekhar’s term in the Upper House was slated to end in November, next year.

In the meantime, newly appointed BJP Uttar Pradesh Chief Swatantra Dev Singh asserted confidence of scoring good in the Rajya Sabha by-polls slated for August 26. Looking at the number that BJP has in the Uttar Pradesh Assembly, it looks it will be an uphill task for the saffron party to get another berth in the Upper House.

While, the poll Commission also announced the dates for by-polls to the legislative councils of Andhra Pradesh and Telangana by MLAs of the Assemblies of both the Houses.

The seats in Andhra Pradesh fell vacant after three MLCs tendered their resignation while in Telangana, MLC was disqualified.

Here’s the schedule for the by-elections to the legislative councils of Andhra Pradesh and Telangana. 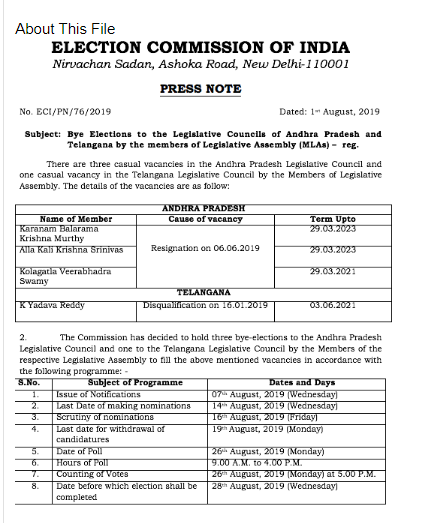