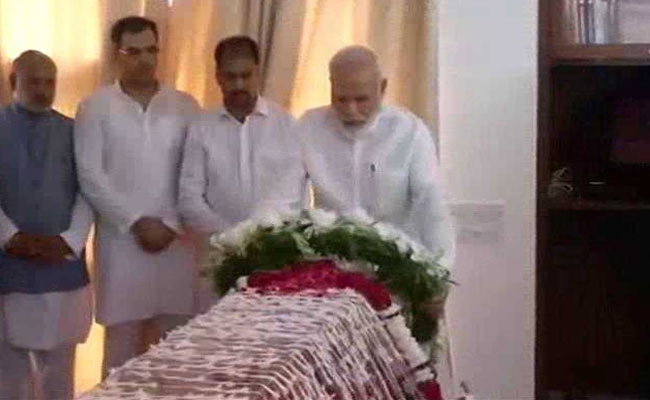 Prime Minister Narendra Modi visits Bhartiya Janta party’s Headquarter where her body is being kept for the mourners to pay their last tribute. Prime Minter and others expressed their condolence over the tragic loss of the nation. Narendra Modi broke down while paying his last rites to the leader.

Former External Affairs Miniter Sushma Swaraj breathed her last on August 6, in AIIMS (All India Institute of Medical Sciences) Delhi. She passed away on Tuesday because of Cardiac arrest. Earlier in 2016, she had undergone treatment for her Kidney Failure.

Leaders from all over the nation have been coming to extend their support to the family of Sushma Swaraj. Her party members have been left in a deep state of shock and sadness over such a tragic loss. Prime Minister Narendra Modi described the death of her close aid, Sushma Swaraj as a personal loss.

The senior leader of Bhartiya Janta Party, Lal Krishna Advani also described the demise of the leader as an irreparable loss to himself. He extended his heartful support to her family.

Senior BJP leader LK Advani: The nation has lost a remarkable leader. To me, it is an irreparable loss and I will miss Sushmaji’s presence immensely. May her soul rest in peace. My heartfelt condolences to Swaraj ji, Bansuri & all members of her family. Om Shanti. #SushmaSwaraj pic.twitter.com/4FuLwWAgli

The whole nation is mourning over the tragic loss of one of its favorite woman leader. Supporting comments have been coming from every sphere of the party.

For paying tribute to the former and first woman Chief Minister of Delhi, Delhi government has announced two-day mourning in the capital region.