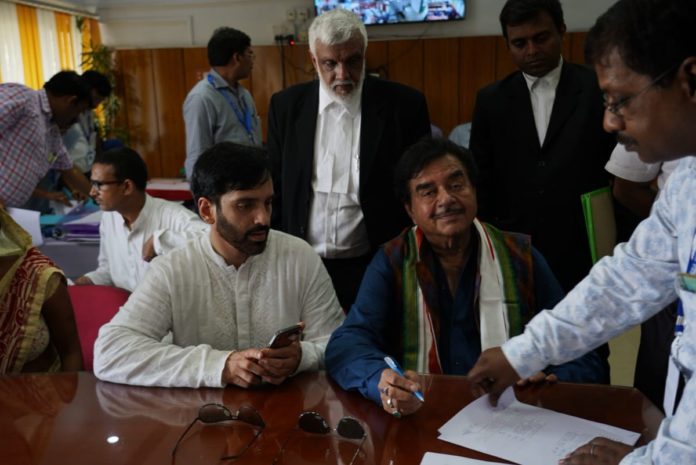 Bharatiya Janata Party rebel and a Congress candidate for the mega polls, Shatrughan Sinha on Monday filed his nomination papers for Patna Sahib Lok Sabha Seat. Accompanied with State Congress Leaders, Sinha took out a roadshow in the parliamentary seat ahead of filing nominations. He was accompanied with hundreds of party workers and supporters during the roadshow which culminated in District Collectorate Office.

‘Today, I filed my nomination as a candidate for the Patna Sahib Lok Sabha constituency, as a candidate of the Congress party, and with the support of the MahaGathbandhan partners, in the presence of Shri. Akhilesh Prasad Singh of Congress. I am grateful for the overwhelming’, tweeted Sinha.

‘Support and blessings of my own people who marched alongside during our roadshow at Patna’ he added with a Hindi poem.

support and blessings of my own people who marched alongside during our roadshow at Patna.

However, in a run-up to the national elections 2019, Shatrughan Sinha who has been lately become a strong critic of Bharatiya Janata Party and Prime Minister Narendra Modi was replaced by BJP with Union Minister Ravi Shankar Prasad.

General Elections 2019 is being held across seven phases starting April 11 to May 19. The voting on 72 Parliamentary constituencies as a part of Phase-IV is underway today.

Counting of the votes will be held on May 23. Patna Sahib Lok Sabha Seat will go to polls on May 19, while April 29 is the last date to file nomination.

In Bihar, The fight is between NDA and UPA, with BJP, JD(U) and LJP in the NDA. UPA comprises Congress, RJD, RLSP, VIP, HAM and others.