Ruby on Rails is a server-side web development framework written using the Ruby programming. It is an open source web app framework and comes under the MIT license. Rails is a model view controller (MVC) framework. It provides a default structure for a database, a web service and web pages to the users. Rails also facilitate and encourages the use of various web standards. It facilitates the use of JSON or XML for data transfer and HTML, CSS and JavaScript for web page display and user interface.

More about Ruby on Rails for web development:

Ruby on Rails is an open source software, so not only it is free to use, users can also make changes in it to make it better. The main reason for the popularity of Ruby on Rails web development lies in its speed and ease of use that it provides to the developers. It also allows users to quickly apply the changes made in the application. This avoids the time-consuming steps that normally associate with the web development. It runs easily on most of the Web Servers supporting CGI. The framework supports some popular servers such as MySQL, PostgreSQL, SQLite, SQL Server, DB2, and Oracle.

What is an IDE:

An Integrated Development Environment (IDE) is a software application for computer programming. IDE provides comprehensive facilities to programmers for development of software. An IDE mainly consists of 3 different parts. The first part is the source code editor that provides an editor for writing the codes from the program. The next part is the build automation tool that mainly compiles the codes by the programmer. The third part is a debugger whose main task is to test or debug the program for any errors in the code. There are IDE’s available for various programming languages such as Java, Python, C, C++ and others too. 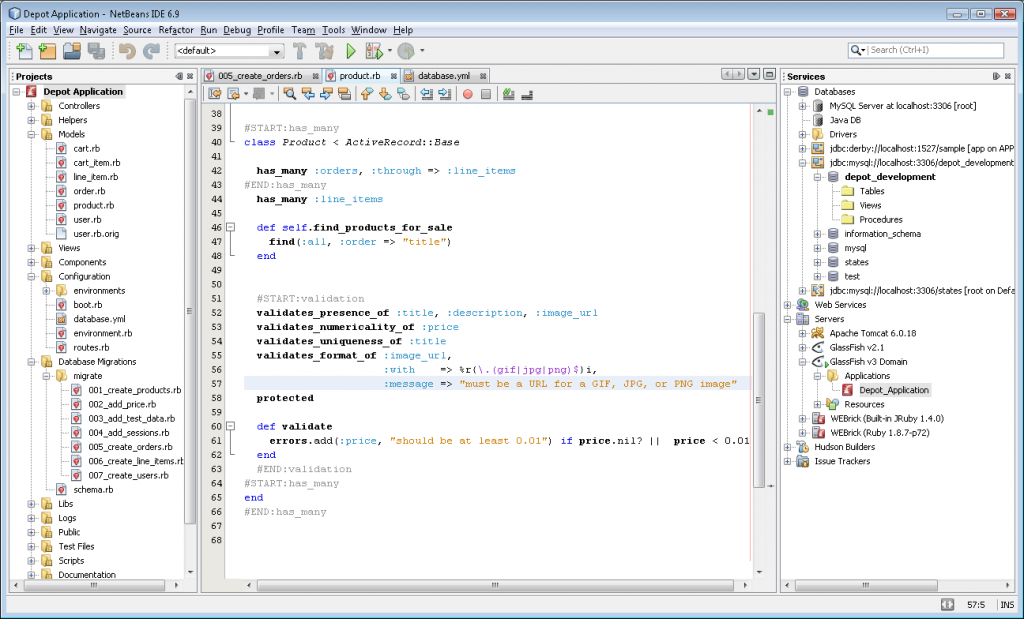 Nowadays most of the modern IDE have an intelligent code completion. The IDE design helps programmer by maximizing the productivity by providing tight-knit components. These components have the similar user interface that allows the programmer to easily use them. Some IDEs contains either a compiler or an interpreter such as SharpDevelop and Lazarus. While some other IDE such as NetBeans and Eclipse contains both the compiler and interpreter for the execution of code. Some IDEs are mainly designed for a specific programming language. However, there are many multiple language IDE that allow user to do programming for multiple languages using just one IDE.

Now, after knowing about the Ruby on Rails framework and IDE, lets now know about some of the best known Integrated Development Environment (IDE) for the Ruby on Rails web application framework. So, here is a list of Top 10 IDE for Rails.

RubyMine is a full featured IDE for Ruby that includes most of the modern set of features that an user will need. These features will facilitates users with rapid web development. RubyMine comes from the house of the Jet Brains. Jet Brains is one the leading and familiar programming language development tools name. RubyMine works well with most of the major frameworks such as Ruby 2.4 and Rails 5, Puppet, AngularJS, RubyMotion and many more. NetBeans IDE is one of the mostly used IDE for different programming languages. It is a faster and smarter way to code for programmers and developers. NetBeans allows users to quickly and easily develop desktop, mobile and web apps with Java, HTML 5, PHP, C/C++, etc. It is available for free with a large community of users and developers. It comes from the house of Oracle.

VIM is one of the old and classic IDE and is also very popular among its users. Its popularity is mainly among the developers who love to use the keyboard (no mouse) for lightning fast coding. VIM is a free to use IDE and it is available under the open source software license by GPL. Its popularity is known from the fact that many engineers at Facebook have used VIM during the early development of Facebook itself. VIM is known as one of the most feature rich free text editor. Users can easily convert it into a powerful Ruby development environment through right customization and configuration. There are also some plugins like vim-ruby for Ruby Scripting and vim-rails for Ruby on Rails web development.

The next IDE on our list of 10 Best IDE for Ruby on Rails is Aptana Studio. It is another one of the best in class Ruby on Rails IDE which comes from the company named Appcelerator. It is available as open source and free to use for Ruby development.It is a faster, easily customizable, and comes with some new features to help developers to boost productivity. Sublime Text 3 is one of the most powerful cross platform lightweight code editors available for programmers. Although it is an editor but with the use of plugins it can be used as a fully featured IDE. It includes the quality and simplicity of sublime text and also includes powers of Python at one place. Sublime Text 3 core is a lightweight, configurable and feature rich IDE. It gets its powers to use via the use of plugins. There are various plugins available that users can use to transform the text editor into a full featured Sublime IDE for Ruby programming.

Cloud9 is the next IDE on the list of 10 best IDE for Ruby on Rails. It offers IDE for almost every programming languages that also includes Ruby. Cloud9 is becoming very popular among medium to large enterprises very fast. Many companies such as Heroku, Soundcloud, Mailchimp and Mozilla are some of the popular users that are already using Cloud9. Users can easily access the commands in the Cloud9 development environment for Ruby on Rails. User will have to just open the command and then type the program name following ruby. For example ruby demo123.rb. User gets all the features that they will require for Ruby on Rails development such as file manage, text editor, preview and many more features.

Komodo IDE is another cross platform IDE that comes from the Activestate company. Although it is a commercial product but it also offers an open source free version by the name Komodo Edit. This version of Komodo IDE is available for Mac, Windows and Linux. The fully featured Komodo IDE is offered free of cost to qualified educational institutions. The teachers and professors of these institutions can use it in the labs for teaching purpose. It also provides some discount to students who wants to buy the license. Atom is one of the highly configurable text editor that comes from the house of GitHub folks. It is also available under the license of MIT and it is free to use for personal as well as commercial development. Atom has gained popularity very fast and it also boasts a large community. This community helps to keep the editor updated with new features on regular basis. Currently lots of packages and plugins are available for Atom that can be used to customize and extend the core features of Atom Editor. Atom is available for most of the Operating System like Windows, Ubuntu (Debian Linux), Fedora 22+, Mac and Red Hat Linux. Developers can use various plugins that are available to turn it completely into a Ruby editor for Windows or Mac OS.

Most of the Ruby on Rails projects does not need an resource heavy and full featured IDE for development. A lightweight and mature text editor with right configuration will help the developers to complete the development. Emacs is a stunner and most lovable editor for Ruby scripting and Ruby on Rails web programming. Emacs is also available for free to use. The editor also allows developers to customize and configure it according to their needs.

Arcadia is a lightweight IDE for Ruby. It is also written completely in Ruby, using the classic tcl/tk GUI toolkit. Arcadia has some very good features such as script editing, running and debugging support.  It also includes support for source browsing, syntax highlighting and code completion. Arcadia also have support for cross platform on any system where Ruby is installed. 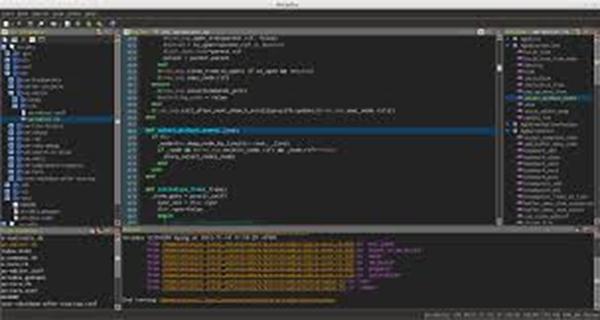 Ruby is a general purpose programming language. It is also often compared with Python in terms of readability and ease of understanding the syntax. Just like Python, Ruby is also a very popular programming language for learning among the beginners candidates. Ruby and Python does not have comparison in terms of usage as Python has widespread applications while Ruby is mainly used for web programming.

So due to limited usage there are not many IDEs for Ruby. However, it this article I hope that readers will find a appropriate IDE for web development using Ruby on Rails.