The smartphone is no less from the other premium flagship smartphone. Starting with the design, the smartphone offers a premium Gold and Black combination, which looks stunning. As a matter of fact, the device uses a glass-metal design, and this device deserves all the appreciations. Without wasting any time, let’s look at the actual tech specifications of the Samsung W2018.

The Samsung W2018 is a smartphone meant for 2018 and, like the last generation model, the smartphone offers a dual display setup. Both on the front and the back, the smartphone is equipped with the 4.2-inch 1080p Super AMOLED touch panels, which offers vibrant colour and awesome viewing angles. For the processor, the company has not made any compromises what so ever. The smartphone is powered by top of the line Qualcomm Snapdragon 835 Octa-core SoC, paired with 6 GB LPDDR4x RAM and 64 GB or 256 GB onboard flash storage. Like always, Samsung has not forgotten to include a micro SD card slot, which can read up to 256 GB. 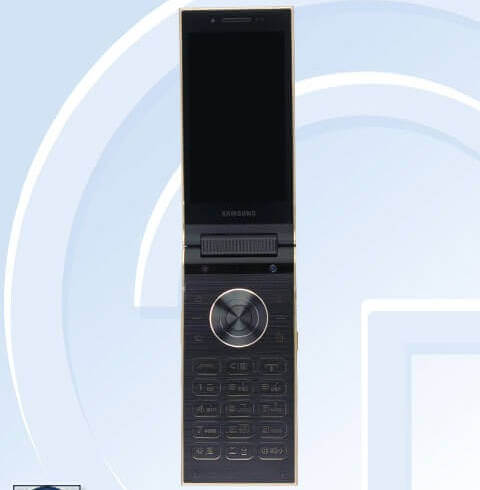 We can easily call this device as Frankenstein version of the Samsung Galaxy S8 (which shares the similar internals). In terms of connectivity, the smartphone offers a single SIM card slots with 4G LTE and VoLte capability with support for faster WiFi, NFC, and Bluetooth 5.0. The device does offer a fingerprint scanner, which is weirdly located (just like the Galaxy S8).

On to the camera capability, the smartphone offers a single 12 MP rear-facing camera with OIS and 1.4-micron pixel size. This camera can do wonders in low lightening condition due to the larger F/1.7 aperture. For the selfie camera, the phone uses a 5 MP selfie shooter with the same F/1.7 aperture. The main camera can record 4K videos up to 30 frames per second, however, front-facing camera tops at 1080p up to 30 frames per second.

In terms of operating system, the device runs on Android Nougat 7.1.2 with custom Samsung UXI on the top. Down the lane, the device is expected to receive Android Oreo update as well. This power packed 2300 sealed battery does offer fast charging capability via USB type C port and like every Samsung smartphone, the device does offer 3.5 mm headphone jack as well.

Last, but not the least fact about the device is the price tag. The device is expected to be priced at 2000 Euros or 2000 dollars price tag, which is almost the double that of the Apple iPhone X. So, if you want to have a one of a kind smartphone, then you have to shell out one of a kind price tag as well.