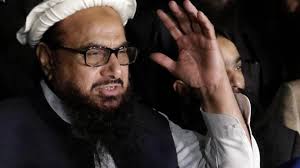 Lahore: Mumbai attack mastermind and Jamaat-ud-Dawa (JuD) chief, Hafiz Saeed on Thursday walked from house arrest as a free man. Moments after his release, he said that he will gather people across Pakistan for the “cause of Kashmir” and help the Kashmiris secure “freedom”.

The JuD head, who carries a bounty of $10 million announced by the US for his role in terror activities, was set free after the Pakistan government decided against detaining him further in any case. He has been under detention since January this year.

He was declared global terrorist by US and UN over his alleged role in Mumbai terrorist attack.

The Judicial Review Board of Punjab province comprising judges of the Lahore High Court (LHC) on Wednesday unanimously ordered Saeed’s release on the completion of his 30-day house arrest which expired on Thursday night.

India expressed outrage over the imminent release of Mumbai terror attacks mastermind Hafiz Saeed from house arrest and stated that this act is an attempt to mainstream proven terrorist, which reflects its support to non-state actors.

In a strong reaction, the Ministry of External Affairs (MEA) said Saeed’s release confirmed once again, the lack of seriousness by the Pakistan Government in bringing to justice offenders of terrorism, including individuals and entities designated by the UN.

“It also appears to be an attempt by the Pakistani system to mainstream proscribed terrorists. Pakistan has not changed its policy of shielding and supporting non-state actors and its true face is visible for all to see,” MEA spokesperson Raveesh Kumar told a press conference.

A Pakistani judicial body yesterday ordered the release of Saeed from house arrest, seen as a setback to India’s efforts to bring to justice the criminals of the 2008 Mumbai attacks.

“India, as indeed the entire international community, is outraged that a self-confessed and UN proscribed terrorist is being allowed to walk free and continue his evil agenda,” he said, adding the terrorist was also responsible for unleashing numerous other terror attacks against Pakistan’s neighbors.

Hafiz Saeed claimed that the US, on India’s request, pressured Pakistan to detain him.

“I fight the case of Kashmiris. I will gather the people from across the country for the cause of Kashmir. And we will try to help Kashmiris get their destination of freedom.”

His supporters shouted anti-India slogans and described his leader as “a hope for Kashmiri people”.

Punjab Assistant Advocate General Sattar Sahil said the government law officer had presented “some important evidence” to justify Saeed’s detention but all three members of the board unanimously rejected it and ordered his release.

On the order of Hafiz Saeed’s release, Raveesh Kumar said that Pakistan should act responsibly and should fulfill its international obligations and take credible and effective action against terrorists like Saeed.
“His release confirms once again the lack of seriousness on the part of Pakistani Government in bringing to justice perpetrators of heinous acts of terrorism, including by individuals and entities designated by the United Nations”.
The banned Jamaat-ud-Dawah head, who carries a bounty of USD 10 million announced by the US for his role in terror activities, has been under detention since January.

On 31 January, Saeed and his four aides — Abdullah Ubaid, Malik Zafar Iqbal, Abdul Rehman Abid and Qazi Kashif Hussain — were detained by the Punjab government for 90 days under the Anti-Terrorism Act 1997 and the Fourth Schedule of Anti-Terrorism Act 1997. However, the last two extensions were made on the ‘public safety law’.

The board refused to give further extension to the detention of Saeed’s aides. They were set free last month.

Under the law, the government can detain a person for up to three months under different charges but for extension to that detention, it needs approval from a judicial review board.

The JuD is believed to be the front organization for the banned Lashkar-e-Taiba (LeT) which is responsible for carrying out the Mumbai attack.

Saeed was put under house arrest after the Mumbai terror attack in November 2008 but he was freed by the court in 2009.

Ten LeT militants killed 166 people and wounded dozens in Mumbai in November 2008. Nine of the attackers were killed by police while lone survivor Ajmal Kasab was caught.

Kasab was executed after a court found him guilty and handed down death sentence.