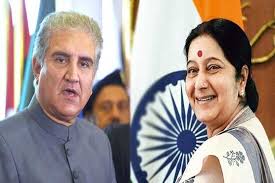 Indian Foreign Minister Sushma Swaraj ignores her Pakistani counterpart before his speech at United Nations. The two Ministers came face to face at an informal SAARC summit at UN general assembly for the first time since the PTI government is in power.

Speaking at the meeting, Swaraj focused on eradicating terrorism in any form without any discrimination and end its ecosystem of its support. She further said the progress in the region wasn’t possible because environment of peace.

Immediately after her speech, Swaraj left the meeting for, as Indian officials said her other scheduled meeting. She didn’t wait for Mr Qureshi speech.

Later Qureshi told reporters “No, I didn’t have any talk with her (Swaraj). On a positive gesture, I can say she left the meeting mid-way, maybe she was not keeping well.”

According to Indian diplomatic sources it is quite normal in a multilateral meeting to leave early after had delivered the country’s statement.

Swaraj was not the first to leave the meeting midway, as her counterpart Afghanistan and Bangladesh had also left before her.