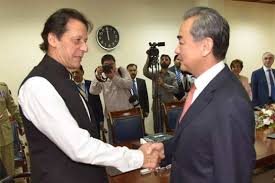 According to media reports, Pakistan premier Imran Khan will be visiting China for his first trip for an official meeting in October.

High level delegation will also be accompanied with Mr Khan on his visit. It will be his first visit after assuming the office in August, 2018.

China Prime Minister congratulated the politician turned cricketer on his win as the PM and invited him to visit China. Pakistani PM accepted his invitation by visiting the all weather ally friend.

The date of meeting, venue, and time is still being finalized. It is said that during his meeting the Chinese PM, Khan will discuss about China Pakistan Economic Corridor (CPEC) project to further deepen it and make the project more Pakistani friendly.

During his the Li-Khan telephonic talk, he voiced his hope to strengthen the friendship between Pakistan under Khan’s leadership. Further, Li said that he wishes to work closely with Naya Pakistan and the newly formed government and hoped the CPEC project to complete on time.