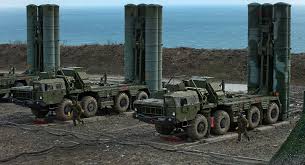 Russia on Wednesday, said it would send more of Russian advance S-400 surface-to-air missile operational system to Crimea, after Moscow has captured Ukrainian three warships and also 12 ship-men under main-trial.

According to a Reuters reports, after tensions rose over Moscow’s move capturing Ukrainian navy ships, they has saw a Russian warship situated nearby.

Russia is onto a mission of maintaining new military hardware into Crimea, since 2014 when they has joined it from Ukraine. Moscow’s announcement of into new missiles process follows its capturing of three Ukrainian warships with their 12 crew members on Sunday, over the matter of illegally entering Russian waters.

Ukraine’s Kiev has introduced “material law” in some of its region after the incident occurred and steps taken up by Russia, saying it feared Russian possible occupation.

The crisis has affected a meeting between Russian President Vladimir Putin and United States President Donald Trump at G20 summit in Argentina. Trump has said that he might cancel the meeting with Putin, referring to the incident.

Russian news agency has quoted Russian southern military spokesperson Vadim Astafyev saying that Russia is on the process to launch new battalion of S-400 missiles into Crimea soon and would become operational by the end of this year-2019.