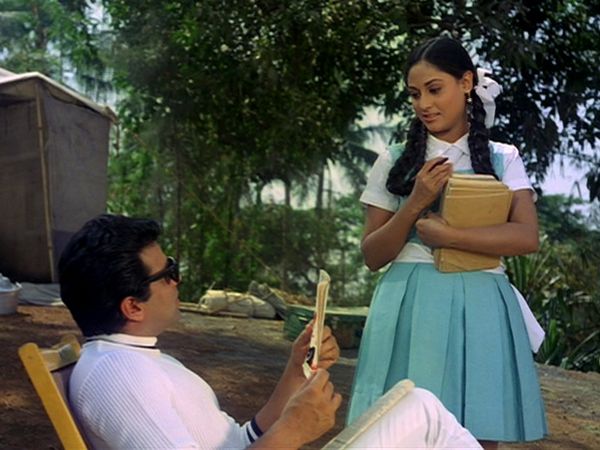 Have you ever been obsessed/attracted to an actor for the character they essayed on screen? We have been nurtured by the media in a way that our minds have been framed and stuck to just one side of the coin that we in reality miss the flip side of everything around us. We tend to believe what we see rather than questioning it.

Kusum’s story is on similar lines in the 1971 film Guddi which intends to be Hrishikesh Mukherjee’s conversation with the world on the glamorous world of cinema. The film follows Guddi, an ardent fan of the film star Dharmendra which indirectly takes her far away from the realities of the world. The comic approach and Dharmendra playing himself in the film is one element that I have always loved in every Mukherjee or Basu Chatterjee film. The craft of connecting reality with fiction is what they were masters of. Guddi is one such comedy-drama that gives us an insight from the glamorous world of cinema and at the same time shows us the flip side of the illusions which we see on screen. The film talks about the ‘heroes’ of cinema who work behind the camera. The film even after fifty years of its release marks its relevance. Through this film, you will relive the thoughts you had about cinema and actors when you were a child.

In a scene where Dharmendra talks about his beginning in the industry, he narrates a story of a destructed studio in which many classics including Do Bigha Zamin, Bandini, etc were shot and the place which should’ve been a center of art is now like an outcast in the world of glamour.