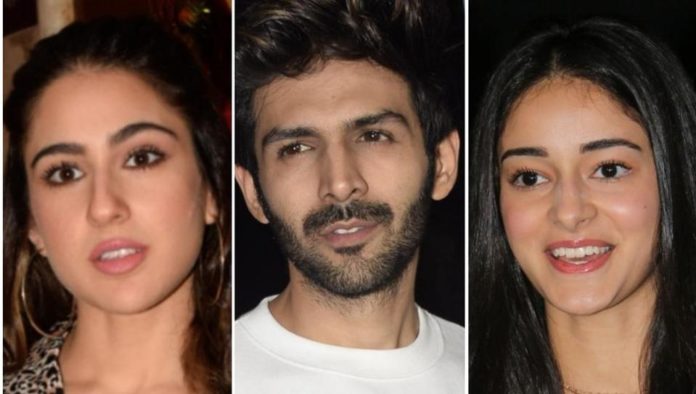 Kartik Aaryan has lately stayed in news a lot for his linkup rumors with several young actresses. Actor is currently working with Ananya Panday in Pati Patni Aur Woh and Sara Ali Khan in Love Aajkal 2. His name is linked with both these actresses and there were recently rumors of his breakup with Sara Ali Khan.

When Kartik Aaryan had started shooting with Ananya Panday for the movie Pati Patni Aur Woh, both had started to spend a lot of time together and were often spotted in the city. This fueled the rumors of them being in a relationship. During this time only, Sara Ali Khan created news when she on a chat show revealed that she wants to be in a relationship with Kartik Aaryan.

At this time only, Kartik and Sara bagged their first project together from Imtiaz Ali and it started a two dimensional relationship streak for Kartik Aaryan. It was recently reported by several media houses that Kartik and Sara have decided to break-up as they were having difficulty managing it in such a busy professional life.

Kartik in a media interaction recently quashed such reports and said that nothing of this sort is going on. He said, “I have done a ad shoot recently with Amitabh Bachchan and nobody is talking about it. I had dinner with Ananya and everyone started talking about it. There is no truth to it”.

Talking about their film, Kartik and Ananya will soon be seen in romantic comedy film Pati Patni Aur Woh. The shooting for the film is almost complete and it is all set to release on 6 December 2019.

With Sara Ali Khan, Kartik is currently shooting for Love AajKal 2. The film is directed by Imtiaz Ali and it is a romantic drama film. It is scheduled for release on 14 February 2020 on Valentine’s Day.