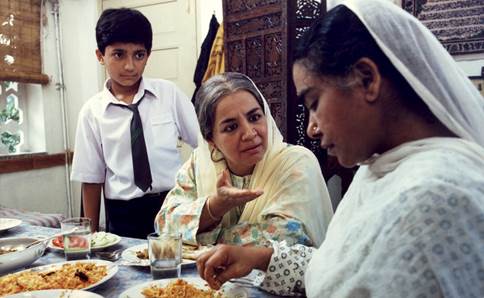 Mammo is a simple story of ordinary people told in the most interesting manner.

Mammo is a film I do not remember how I came across. What I distinctly remember is that I was awestruck with the sincere portrayal of a regular middle class Muslim family. Another such film is the classic Garam Hawa. But I find Mammo more relatable and cherish it more. If you watch the two, you would understand why.

Written by Khalid Mohamed and directed by Shyam Benegal, this is the first film of Muslim trilogy including Sardari Begum (1996) and Zubeidaa (2001) and extended with Well Done Abba (2010). Mammo is a story of a young boy called Riyaz (Amit Phalke) who lives with his Naani (maternal grandmother) Fayyazi (Surekha Sikri) in Bombay. One day, Fayyazi’s widowed sister Mammo aka Mehmooda Begum (Farida Jalal) visits them from Lahore. She does not have any child, is widowed and not on good terms with her in-laws either. And hence, decides to stay with Riyaz and Fayyazi in Bombay. But she is forcefully sent back to Pakistan after her visa expires. After years, she visits again with a concrete plan to stay in the country where she was born. 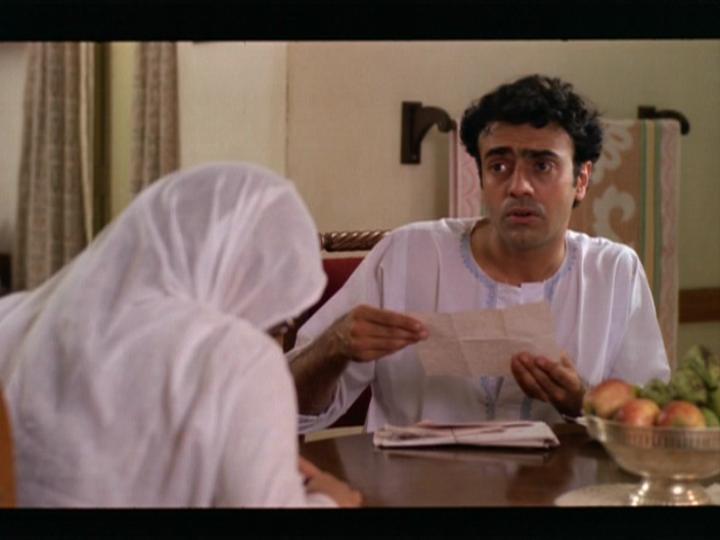 The film starts with a close-up of Rajit Kapoor (older Riyaz) with a Gulzar penned song ‘ye faasle teri galiyon’ in Jagjit Singh’s mesmerizing voice in the background. Soon Riyaz is on breakfast table with his Naani. The conversation somehow turns about Mammo Naani. The doorbell rings, Riyaz opens the door and we see Mammo Naani standing at the door and before her is standing a young Riyaz. What a beautiful transitioning shot to take the viewer into flashback. I watched such transitioning shot in 2002 film The Hours for the first time. (Yes, I saw Mammo after that). 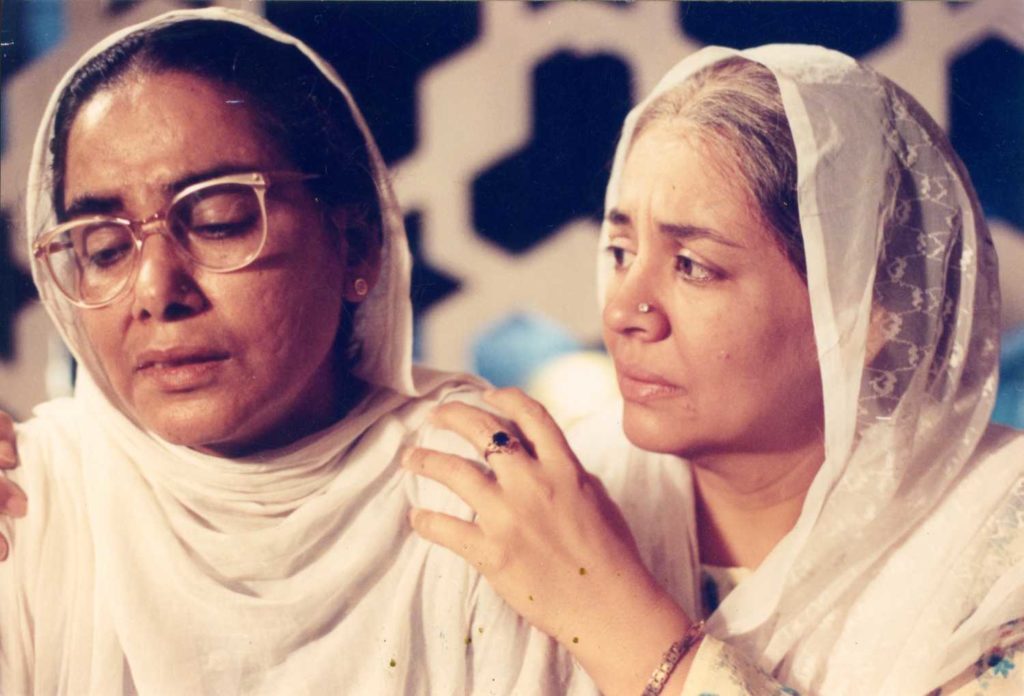 Almost the entire film occurs in the flashback during 1970s except for the beginning and ending scenes.The film is not about the Partition itself but the lingering effects the 1947 tragedy has on the lives of ordinary people. The beauty of Mammo lies in its simplicity. It doesn’t look like an artificial portrayal of characters Fayyazi, Mammo, and Riyaz. Instead, it feels we are peeping through a window into their day-to-day ordinary life. And how interesting ordinary can be you realize after watching this film! Bollywood has made us habitual of watching everything over the top whether it is action, comedy, drama, romance or even a slice of life film. It is rare that we get to see our lives on the screen as they are. And it is even rarer to see believable Muslim characters on the screen. Mostly, Muslims are shown as stereotypes, either they are good kindhearted Rahim Chacha or a loyal friend of Hindu hero. Kids call their parents Amma Huzoor, Abba Huzoor. Conversations are filled with abrupt “MashAllah” “SubhanAallah”. And random qawwali song appears out of nowhere. But in Mammo, nothing appears out of nowhere. Everything you see on the screen is part of the narrative. And the narrative develops smoothly and organically. The characters in Mammo not only gives you a true picture of muslim households but they are realistic as individuals too. Fayyazi is extremely happy on her sister’s arrival. But as the time passes by and she feels ignored by her grandson because of his love for Mammo. Like any other pair of sisters, they also have arguments and fights.

Another reason I love this film is that it has several literary references organically weaved in the conversations of the characters. In one scene, Sikri asks Jalal if they still show Indian films in Pakistan. Jalal tells her that they don’t anymore but there are Pakistani films being made. But of course they don’t have the charm of the likes of Dilip Kumar. She also tells her about an emerging singer in Pakistan — Iqbal Bano who sings ghazals of Qateel Shifai. I was newly introduced to Iqbal Bano’s Hum Dekheinge and Dashte Tanhai those days. And when I saw the reference in the film, it gave me a rush, an almost euphoric moment. Another such moment is when Jalal recites the famous poem of Faiz Ahmed Faiz Raat Yun Dil Mein. There is also Bol Ke Lab Azad Hain Tere. The great writer Saadat Hasan Manto is also evoked in one scene.And yet, nothing looks forced or abrupt –  I am telling you! 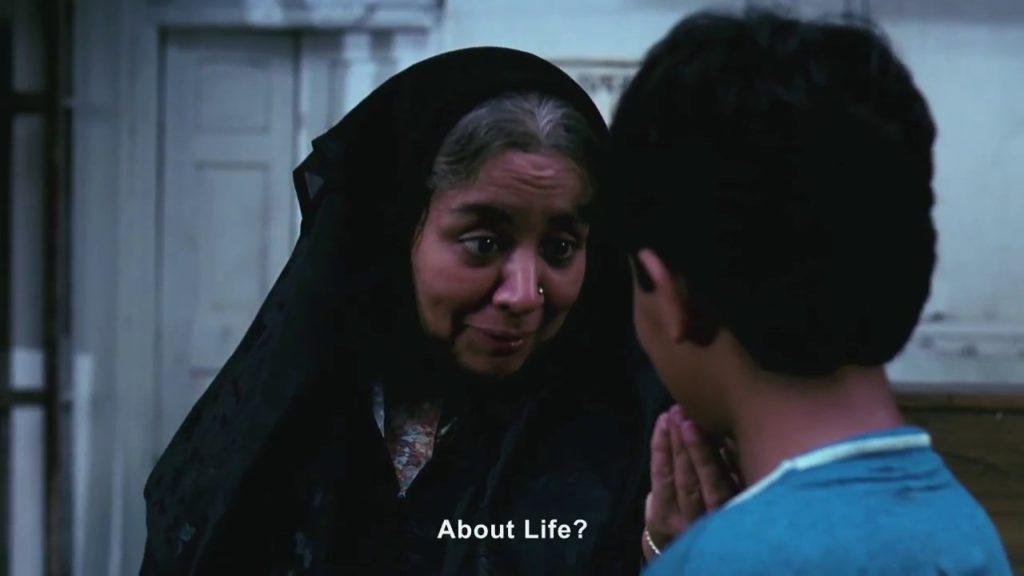 Despite having a strong script and interesting characters, a film may falter if the performances are weak. But in Mammo, the veteran actors are at their best. While Farida Jalal is impressive as the titular character, it is Surekha Sikri who steals the show for me. She gives importance to the minute details of her body language – the duck walk, breathing heavily while yelling, speaking a certain way while showing affection to her grandson, she does it all in the most convincing way. Jalal is also very good but at places she is just.. well Farida Jalal that we have seen in DDLJ, Kuch Kuch Hota Hai and other movies. Jalal won Filmfare Critics Award for Best Performance, while Surekha Sikri won the National Film Award for Best Supporting Actress. The film won the National Film Award for Best Feature Film in Hindi.

Mammo is a simple story of ordinary people told in the most interesting manner. It nowhere crosses the line to the side of melodrama or becomes a sympathy gainer. It makes you smile at places, gives you a rush at some, and makes you think at others without leaving you uncomfortable.

It is a perfect delicacy for a Sunday afternoon. (Re)Watch it this weekend.