As soon as the trailer of Farhan Akhtar and Ritesh Sidhwani’s first web series, ‘Inside Edge’ released, which revealed that Richa Chadha plays a celebrity cricket team owner with a stormy love life, speculations began that the role is based on Preity Zinta, who owns Kings XI Punjab of the Indian Premier League (IPL).

Well, Preity finally spoke up about how she felt about a character like that. The interaction was for the launch of her app, a platform, called Kavach, that speaks about women safety. When touched upon the subject of the show that is based on Cricket and portrays her in a bad light.

She replied, “It breaks my heart that a woman has to go through all of this, and me, with all my success and hard work and everything, I also have to go through it. People will make shows, right? They’ll make a show on TV and say, ‘Oh, it’s based on cricket.’ They’ll show the woman as the whore! Right! They’ll always show a woman as the whore, they’ll never have the balls to show something else. But it’s the most accepted, ‘beat the woman,’ ‘live off her,’ ‘Isko woh victim bana do.’ That’s the psychology of men.”

“A woman in power in India is a bitch or a whore or a…There is no other thing on a TV or celluloid. You find me some inspirational characters…they are all made by men. I also believe that what is inside you is your creativity and that’s what comes on-screen. What you are, shows in your creativity. So all these men show women like this, they somehow, I feel, are the more regressive ones and all, and it’s fine.”

“I do feel bad, it’s very unfair and to be honest, IPL is one of the greatest inspirational stories of hard work, grit, of talent coming from nowhere. I am grateful that today Farhan made a statement and said, ‘Oh, it’s fiction,’ but then, why is fiction so one-dimensional? Why do they have to show the woman as that? So that really upsets me.”

“I am an actress, If I play any role, I research it. Filmmakers research it. It’s made by my friends, they could’ve called me and asked me for some inputs. But, it’s okay people want to make some weird fantasy of theirs…it’s fine. But one thing I will ask you as a woman, genuinely, please ask these makers, were they in that bed seeing who’s screwing who? Please ask them as to how have they come on these plot points and why are they doing this?”, she added.

Reacting to Preity’s comments, Karan Anshuman said,  “My web series is completely fictional. Preity Zinta clearly has no idea of what’s in it and what’s not in it. I strongly recommend that she sees my web series. She will definitely be at peace, then.”

“All the women in Inside Edge are strong and hold their own. I am a feminist and I respect women. Nobody in my show sleeps with someone to become successful.” 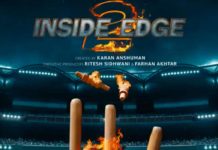 ‘Inside Edge 2’: Farhan Akhtar shares the teaser of Amazon Prime original; Check out

‘Inside Edge 2’: Farhan Akhtar shares the motion poster along with the show’s premiere date; Check out