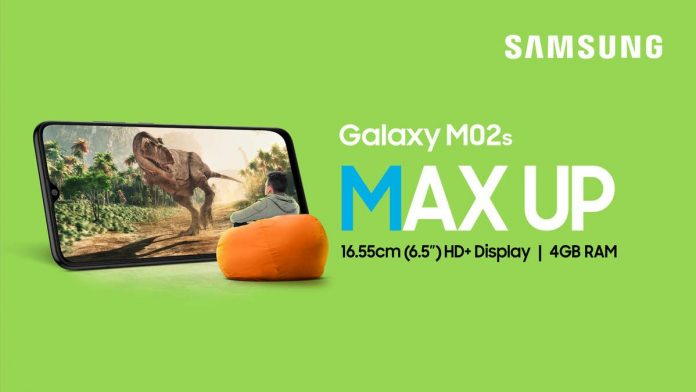 Samsung Galaxy M02s is now officially launched in India and it’s specifications and availability details have also been announced. It is the latest budget offering from the brand with triple cameras equipped in rectangular module, an Infinity-V waterdrop display, multiple colour options and 15W fast-charging support. The smartphone will take on Realme Narzo 20A, POCO C3, Redmi 9 Prime and other budget phones in the sub-Rs.10,000 price segment. The key specifications of this phone includes 6.5-inch HD+ display, Snapdragon 450 SoC, 5,000mAh battery, 64GB internal storage and Android 10.

The smartphone features a 6.5-inch HD+ Infinity-V display with a sizeable chin at the bottom. The smartphone has been powered by Qualcomm Snapdragon 450 chipset with 4GB RAM and 64GB internal storage and it is expandable up to 512GB through a microSD card. The smartphone runs on Android 10-based OneUI custom skin on top. The smartphone comes with 5,000mAh battery and supports 15W charging. Other major connectivity features include 4G LTE, Wi-Fi, Bluetooth, GPS, 3.5mm audio jack and USB Type-C port.

The smartphone is equipped with triple cameras which includes a 13MP primary sensor, 2MP macro lens and a 2MP portrait lens. At the front side, it has a 5MP camera for selfies and video chats. The smartphone doesn’t have a physical fingerprint sensor so, people who purchase it have to be entirely dependent on pattern or pin-based authentication for security.