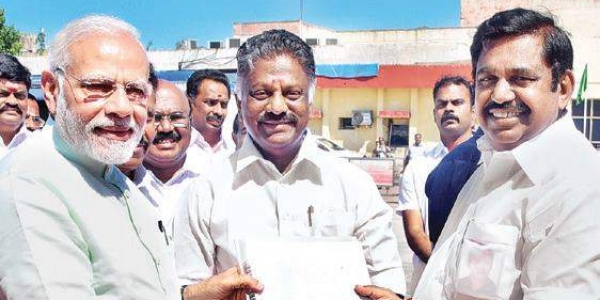 A day after Prime Minister Narendra Modi said the doors of the Bharatiya Janata Party (BJP) are always open for its “old friends” in Tamil Nadu, the opposition Dravida Munnetra Kazhagam (DMK) strongly rejected such options about going with an alliance with the party, while the ruling All India Anna Dravida Munnetra Kazhagam (AIADMK) appeared unsure about stitching an alliance.

“The DMK will never have an electoral pact with the BJP. I want to make this crystal clear,” DMK president MK Stalin said in a hard-hitting statement on Friday.

The DMK has already formed a strong, secular coalition comprising the Congress, Left, Viduthalai Chiruthaigal Katchi (VCK) and Marumalarchi Dravida Munnetra Kazhagam (MDMK), and believes it is ahead of its rivals in the race for the 2019 Lok Sabha elections. Not only that, Stalin was the first to endorse the candidature of Congress president Rahul Gandhi as next prime minister. MK Stalin while unveiling the statue of M Karunanidhi reportedly said, “We will install a new Prime Minister in Delhi, and I propose the candidature of Rahul Gandhi from Tamil Nadu.” Stalin also asked all the opposition parties to join hands of Congress President and ‘save the nation’.

During his interaction with party workers in Tamil Nadu by video conference on Thursday, Modi had referred to former Prime Minister Atal Bihari Vajpayee’s role in successfully ushering in coalition politics. “Even when the BJP won a majority on its own, we preferred to run the govt with our allies. We cherish our old friends and our doors are always open for parties: PM said.

Even when the BJP won a majority on its own, we preferred to run the govt with our allies. We cherish our old friends and our doors are always open for parties : PM @narendramodi #MeraBoothSabseMazboot pic.twitter.com/tGd72cjddj

The comment drew a stinging response from Stalin. “Neither is Modi Vajpayee nor is the present NDA the same as the previous one which represented the plurality of the nation. Modi comparing himself to Vajpayee is indeed strange and ironic,” he said.

However, the AIADMK is yet to make up its mind, though there are positive hints from chief minister Edappadi K Palaniswami and deputy CM O Panneerselvam.

Maharashtra to Launch Home-Schooling New Board

Xiaomi kicks off MIUI 11 development, said to be 'new and unique'