Delhi-based NGO Common Cause has approached the Supreme Court (SC) challenging the appointment of M Nageswara Rao as interim chief of Central Bureau of Investigation (CBI).

The NGO has approached the apex court through senior advocate Prashant Bhushan.

Soon after taking charge as the interim boss of CBI, Rao reversed all transfer orders taken by his ousted predecessor Alok Verma restoring the position of officials as on January 8 after SC reinstated him as the CBI boss.

It may be recalled that Verma was removed from his post after a two-hour-long meeting of the Prime Minister Narendra Modi-led Selection Committee in New Delhi. The panel which also included Mallikarjun Kharge, the leader of the largest party in the Lok Sabha and the second senior-most Supreme Court judge and a CJI nominated, AK Sikri, decided to remove Alok Verma with a 2-1 majority. With Only Mallikarjun Kharge voted against his removal. Panel transferred Verma and he has been given a new charge of Director General Fire Services.

However, Alok Verma on Friday tendered his resignation after refusing to take charge as DG Fire Services, Civil Defence and Home Guards. 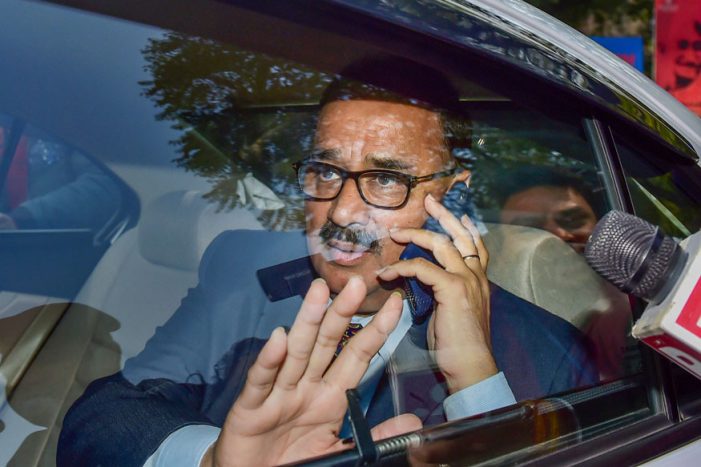 On Tuesday, Jan 8: The Supreme Court reinstated CBI Chief Alok Verma setting aside CVC order dated October 23rd, 2017. Justice Kishan Kaul who pronounced the verdict on behalf of Chief Justice of India Ranjan Gogoi said that the select committee will be called within seven days from Tuesday to take a decision on the basis of the findings of the CVC inquiry into the corruption allegations against the CBI director.

On Wednesday, Jan 9: CBI Boss Alok Verma hours after assuming office sends a strong message to the government by reversing the cancel orders of his loyalists in the office. These transfer orders were initiated by the interim CBI chief M Nageshwar Rao on October 24, a day after Verma was sent to forced leave.

On Thursday, Jan 10: Suspended Deputy Superintendent of Police Devendra Kumar on Thursday moved to Delhi High Court against the reinstated CBI Chief Alok Verma’s decision of revoking transfer orders of his team which was done a day after on October 24, after Verma was sent on forced leave. Devendra Kumar was arrested on October 22 last year in connection to a bribery allegation involving the Special Director Rakesh Asthana. However, he was later granted bail by furnishing bail bond on ₹50,000.

Earlier, Alok Verma had moved to top Court sought to quash of three orders of October 23, 2018 — one by the Central Vigilance Commission (CVC) and two by the Department of Personnel and Training (DoPT), as being without jurisdiction and in violation of Articles 14, 19 and 21 of the Constitution.

The Centre had in October last taken a decision against Verma and CBI’s Special Director Rakesh Asthana after their feud become public as they made allegations of corruption against each other.

No more sale of plastic in Puducherry as govt proposes to ban single use plastic from March 1
Tejashwi Yadav meets Akhilesh Yadav and Mayawati, hints RJD may not dump Congress in Bihar
Comment