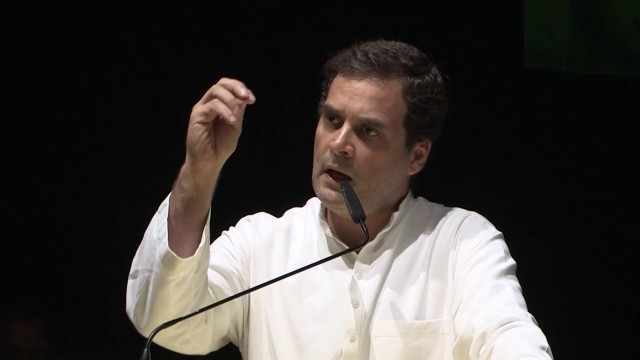 Congress president Rahul Gandhi again threw a barrage of criticism at Modi-led government by tweeting that like Rafale, demonetisation was a “crime against India”.

He also lashed out at the former chief economic advisor, Arvind Subramanian saying that he should have resigned if he disagreed so much with the decision of note ban by Modi.

Rahul Gandhi’s tweet read: “Demo like Rafale was a crime against India & a huge scam. Parrikar distanced himself from Rafale to save his skin. Mr Subramanian is doing the same with Demo. I wonder why he didn’t resign when he disagreed so much? Don’t worry India, the guilty will be investigated and punished.”

After Arvind Subramanian called demonetisation a “draconian, monetary shock”, the Congress party tweeted: “Former Chief Economic Advisor @arvindsubraman finally reveals his true feelings about the #DestructionByDemonetisation Obviously criticising a decision by the Supreme Leader while in govt. would’ve been completely outside the realm of possibility.”

In a chapter of his upcoming book ‘Of Counsel: The Challenges of the Modi-Jaitley Economy’, Subramanian has written, “Demonetisation was a massive, draconian, monetary shock: In one fell swoop, 86 percent of the currency in circulation was withdrawn. The real GDP growth was affected by the demonetisation. Growth had been slowing even before, but after demonetisation, the slide accelerated. RIn the six quarters before demonetisation, growth averaged 8 percent and in the seven quarters after, it averaged about 6.8 percent (with a four quarter window, the relevant numbers are 8.1 percent before and 6.2 percent after).”