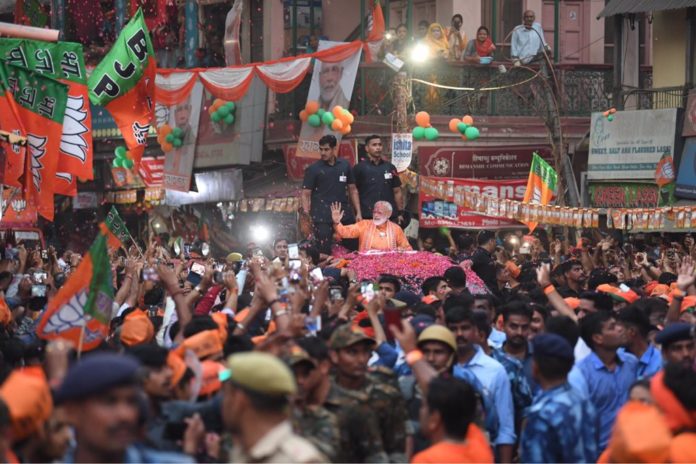 Aam Aadmi Party Leader and Rajya Sabha MP Sanjay Singh on Saturday filed a complaint with the Poll Commission alleging that Prime Minister Narendra Modi in his roadshow in his parliamentary seat has exceeded the expenditure limit of Rs 70 Lakhs.

AAP Leader in his letter to the Poll Body alleged that a total of at least 4 private planes were used to bring the guests that amount to over 64 lakhs approximately. The letter further said more than 100 leaders took a commercial flight to reach Varanasi at a cost of minimum of 15 lakh.

Sanjay Singh further stated that Over 100 of leaders from BJP-led NDA joined the mega show in Varanasi, ‘The hotel expenses of all were around Rs 8 lakh, while the expenditure on vehicles was Rs 6 lakh’.

‘All parties shud come together and seek strong action against blatant use of money against all norms. EC shud act strictly as per law without being cowed down by who is the person involved’, said AAP National Chief Arvind Kejriwal while slamming Prime Minister Narendra Modi.

All parties shud come together and seek strong action against blatant use of money against all norms. EC shud act strictly as per law without being cowed down by who is the person involved. https://t.co/clCsSnEy6o

Aam Aadmi Party in the letter stated that this is a gross violation of the Election Commission guidelines that restricted such expenses to Rs 70 lakh.

Narendra Modi who is seeking his second term from Varanasi filed his nominations on April 26 in the presence of a galaxy of leaders from its allies partners including Prakash Singh Badal, Nitish Kumar, Ram Vilas Paswan and among top brasses from the Bharatiya Janata Party.

PM Modi ahead of filing nomination had held a 6 KM Roadshow after paying tributes to the statue of Pt Madan Mohan Malviya outside Banaras Hindu University. He also offered Ganga Aarti in Dashashwamedh Ghats.

General Elections have already started and would spread across all seven phases from April 11 to May 19.