The Indian Wire » Politics » ABP News-Cvoter Opinion poll predicts set back for BJP in LS Polls; NDA to get 233, UPA 167 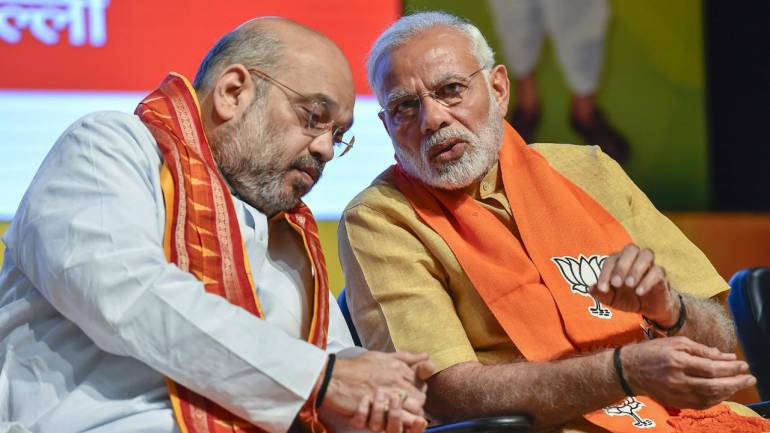 The Bhartiya Janta Party will suffer a major setback in the upcoming Lok Sabha Polls 2019 predicted an opinion poll conducted by TV News Channel ABP along with CVoter. Survey predicted that BJP led NDA will fall short of the majority mark of 272 seats in the Lok Sabha. However, it is predicted that the NDA alliance will emerge as the largest coalition bloc in the Parliament.

The ABP News-C Voter poll predicted that the NDA would win 233 seats, while the Congress-led UPA would secure 167 seats. Other parties are expected to win 143 seats. The BJP had in 2014 won 282 with its alliance NDA bagged 336 seats overall. The Congress-led United Progressive Alliance won just 60 seats in the elections, with the Congress registering its worst-ever performance, securing just 44.

The Survey predicted that NDA is set to lose heavily in Uttar Pradesh. BJP – who had in 2014 won 73 out of 80 seats – is now heaving its upper hand in just 25 seats of the state. While new BSP-SP alliance likely to dash all the hopes of BJP. The poll predicted BSP-SP would win 51 seats in the state if elections happen today. While Congress could manage to bag 4 seats in the state.

However, there is some positive news coming from Bihar for the Saffron Party. The BJP-JDU alliance is expected to sweep the polls winning 35 out of the 40 seats. While Congress along with RJD and others is expected to reduce to just 5 seats in the state.

Meanwhile, In West Bengal, Mamata Banerjee led Trinamool Congress emerged as the runaway leader winning 34 of the 42 seats. BJP which was a non-existent force in the state has made inroads winning 7 seats.  In Odisha, the Biju Janata Dal is estimated to win just nine seats while the BJP may end up with 12.

Madhya Pradesh and Rajasthan where the party has just lost state polls seems not be making a hard dent with BJP winning 23 out of 29 seats in Madhya Pradesh, while 18 out of 25 in Rajasthan.

While in Modi’s bastion Gujarat, BJP is set to sweep the polls winning 24 out of 26 seats, the survey predicted.

In the northern states, Congress seems to have a stronghold in Punjab, sweeping the state with wins in 12 of the 13 LS seats while BJP is set to surge ahead in Haryana, winning 7 of the 10 parliamentary constituencies.

However, Maharastra this time is going to be with the Congress. Cvoter survey predicted Congress-NCP alliance edge on 28 seats out of 48 seats in the state. While BJP on 20 seats.

In southern states of Karnataka, Kerala, Tamil Nadu, Andhra Pradesh and Telangana, the Congress-led UPA would win 69 of 129 seats, the ABP News-C Voter survey claimed. The NDA is expected to be restricted to 14 seats, with the rest going to regional parties.

India Today Opinion Poll has also suggested that in case of Congress go alone in the state, BJP and its ally would win 18 seats. While a recently formed alliance between three regional parties – Samajwadi Party, Bahujan Samaj Party, Rashtriya Lok Dal in the state could win 58 seats without Congress joining it, the poll showed. Congress would have its upper hand on 4 seats in that scenario.

It may be recalled that the SP and the Congress had joined hands in Uttar Pradesh assembly elections 2017, but the alliance failed miserably to take on the BJP. However, Reportedly both the major forces of the State – Samajwadi Party and Bahujan Samaj Party has tied up for the Lok Sabha Polls 2019. If reports to be believed, The BSP-SP coalition has kept congress away in Uttar Pradesh.