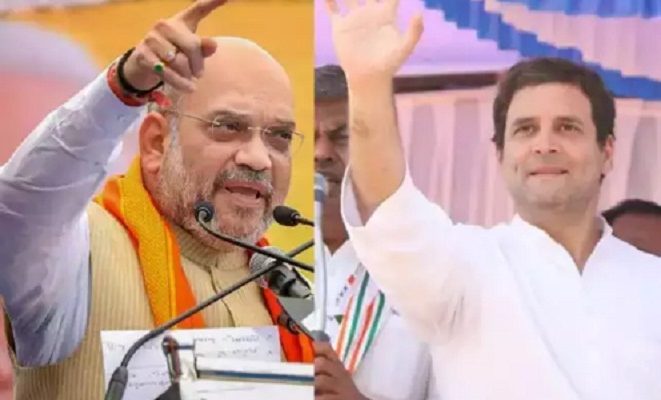 Almost a month to go for elections in Madhya Pradesh, the BJP and the Congress are making efforts to reach out to voters in the state. Both BJP president Amit Shah and Congress chief Rahul Gandhi will be in Madhya Pradesh for a two-day visit reaching the state today.

Rahul Gandhi will start his affairs by first offering prayers in the world famous temple of Goddess Pitambara. After which he will address 6 public meetings and two roadshows. Rahul Gandhi will address public meetings in Datia district, Dabra and Gwalior town in Gwalior district, Sheopur district, besides Sabalgarh and Jaura in Morena district. He is also said to pay tribute to late Congress leader Madhav Rao Scindia at Gwalior.

Earlier BJP chief Amit Shah had addressed a party workers’ convention in Hoshangabad where he accused the previous Congress-led UPA government of discriminating against Madhya Pradesh in the allocation of funds. He told a that the UPA government had allocated Rs 1.34 lakh crore under the 13th Finance Commission, whereas the Narendra Modi government gave the state Rs 3.44 lakh crore as part of the 14th Finance Commission allocations. He also appealed to the party workers to complete the mission of 200-plus seats in the state, where the party had won 165 seats in the 2013 polls.

Meanwhile, senior congress leader in the state, Jyotiraditya Scindia has said that the people are looking up to the Congress for change to bring a wave of development and progress. He also claimed that the party is still in the ‘driver’s seat’. “The workers are motivated and the people are looking to us for change. So, we are definitely still in the driver’s seat”, he said.  He also said that the people of Madhya Pradesh have suffered from the BJP rule for 14 years and they are angry.

The state will go to polls on November 28 and counting of votes will be held on December 11.