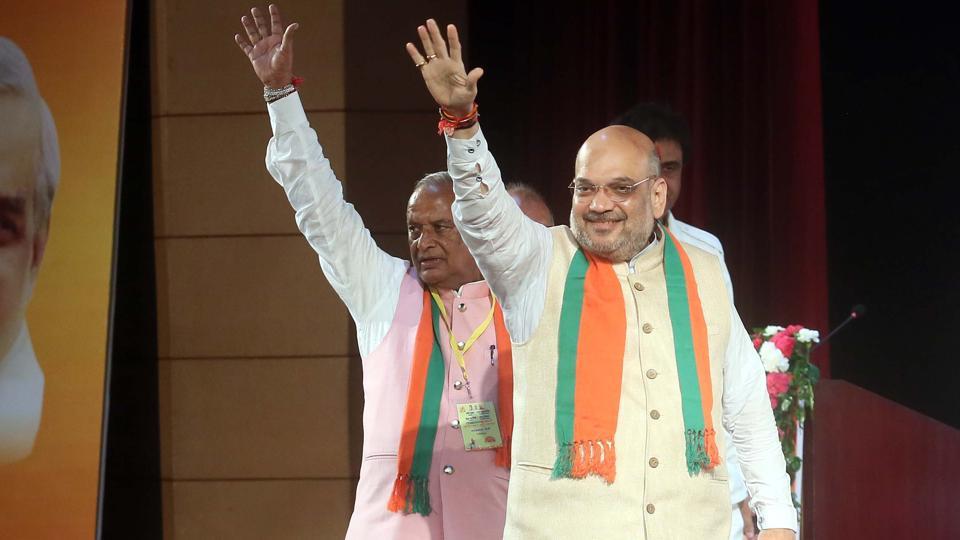 BJP President and Union Home Minister Amit Shah on Tuesday will visit Gujarat’s Ahmedabad on Wednesday. This will be Amit Shah’s first visit to the state after he assumed charge of the Home Ministry. During his maiden visit to his native state, Amit Shah is slated to inaugurate several developmental projects.

According to BJP released, Union Home Minister Amit Shah will reach Ahmedabad by 3 pm and will be welcomed outside the Airport. He would later inaugurate the newly built Income Tax Flyover at 5 pm.

Bharatiya Janata Party Chief will also unveil the DK Patel Hall on VBS Ashram. He is also slated to address a convention at Gujarat University Convention Hall. BJP MP from Gujarat’s Gandhinagar will also hold a review meeting and will seek the details about developmental works of his parliamentary constituency.

Shah will stay back in Ahmedabad and will participate in ‘Mangal Aarti’ in Ahmedabad’s Jaganath Temple.

This will be the first visit of Amit Shah after being inducted to Modi Cabinet and assumed the Home Minister’s Office. Shah elected to the 17th Lok Sabha after registering a massive victory in terms of vote margin. Shah defeated Dr. CJ Chavda of Indian National Congress with a heavy margin of 5.55 Lakh votes from Gandhinagar Lok Sabha Seat.

He has been given the Home Minister’s portfolio replacing BJP Stalwart Rajnath Singh. Till now, Shah managed to score well in Parliament with gathering support from the opposition over two important Jammu and Kashmir’s issues – J&K Reservation Bill and Extension of President’s rule in the valley.

While later in the week, Shah will visit Telangana‘s Hyderabad eyeing to make a big dent on KCR’s bastion. Shah will launch the party’s 5-week long party’s membership drive. Bharatiya Janata Party (BJP) Chief Amit Shah will also hold discussions with leaders as the party is eyeing to form the next government in the state.

BJP Chief Amit Shah had earlier claimed that BJP will form its next government in the state.