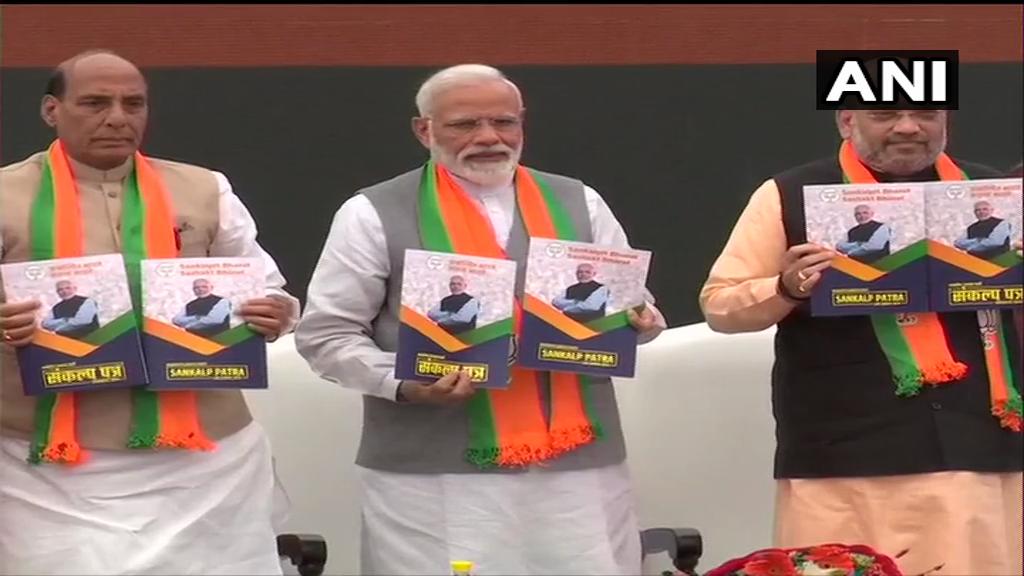 With less than 3 days left for the first phase of voting for national elections 2019, the ruling Bharatiya Janata Party on Monday released its poll manifesto for the mega battle of ballots 2019.

The Party’s Manifesto was launched in the mega event at the party’s headquarters in the national Capital in the presence of Prime Minister Narendra Modi, BJP President Amit Shah, Union Minister Arun Jaitley, Rajnath Singh, Sushma Swaraj and other top brasses from the party.

Party manifesto titled ‘Sankalp Patr’ focused on varsity of Issues including Nation First Slogan, Doubling Farmers Income, Abrogation of Article 35A and Article 370 in the valley, Health for All, an extension to PM Kisan Scheme all farmers removing the bar of 2 Hectare Land, among others.

Speaking in the event Prime minister Narendra Modi said, ‘To develop India, development has to be made into a mass movement, and a successful result of that is ‘swacchta’, today ‘swachhta’ is a mass movement’.

He added, ‘We have set 75 well-defined resolutions in our manifesto that we can fulfill in a time-bound manner. We are moving forward with ‘one mission, one direction’.

The party also said to make a consensus for One nation, One Poll. Speaking in the event Union Home Minister Rajnath Singh said, ‘We had a zero tolerance policy towards terrorism, it will continue till terror is not eliminated completely’.

Commenting on the Ram Mandir Issue, Singh said, ‘As far as Ram Mandir is concerned, we reiterate the promise made in the last elections. We will weigh all our option and we will try that the Ram Mandir be built as soon as possible in a harmonious environment’.

Union Home Minister Rajnath Singh at BJP's election manifesto release: As far as Ram Mandir is concerned, we reiterate the promise made in the last elections. We will weigh all our option & we will try that the Ram Mandir be built as soon as possible in a harmonious environment. pic.twitter.com/xofbN7500K

Bharatiya Janata Party further promised that it is fully committed to 33% reservation in parliament and state assemblies through a constitutional amendment.’Women’s welfare and development will be accorded a high priority at all levels within the government’ the BJP manifesto added.

Hailing her government Union Minister Sushma Swaraj said,’This is an indication of Modi ji’s diplomatic success that when Pakistan threatened to boycott Organisation of Islamic Cooperation(OIC) meeting if India was invited then 56 out of 57 countries said let Pakistan not come’.

Other Promises in the Manifesto Includes:

Earlier the party had on Sunday released its Theme, slogan, and song for the General Elections 2019. Union Minister Arun Jaitley while addressing the press unveiled party tagline ‘Phir Ek Baar Modi Sarkar’ similar to what the party has used in 2014 national elections.

The party’s TV Commercial has been planned to highlight the achievements of Modi Sarkar such as OROP, Ujjawala, Terror Countering, etc.