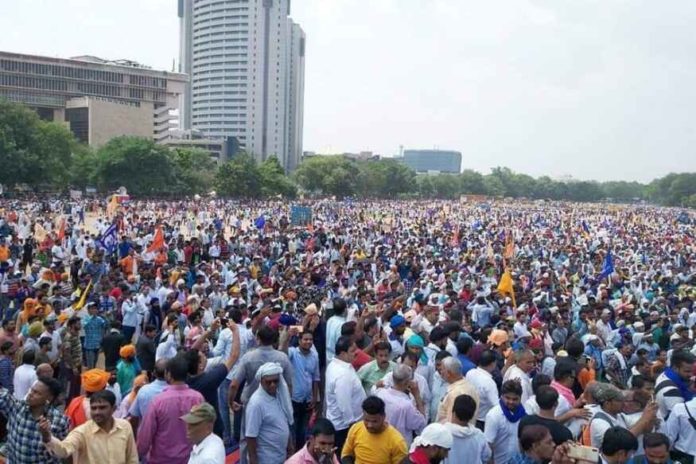 Dalit leaders who undertook a protest in the national capital last week to demonstrate against the demolition of Ravidas Temple have now announced to launch a three-month movement. The demolition of the temple has hurt religious sentiments of the Ravidasia community.

The Dalit leaders have given a deadline of November 26 to the government for rebuilding the temple. Ashok Bharti (Dalit activist) told media persons that they want an immediate release of all arrested protestants. The leader, speaking to News18 also said, “We are going to announce the beginning of what we feel is going to be a long and protracted battle for the rebuilding of Sant Ravidas temple. We demand that the temple be rebuilt in exactly the same spot where it stood for the last 500 years.”

Earlier in the previous week, Bhim Army took to the streets of capital protesting against the demolition of Ravidas Temple. Bhim Army Chief Chandrashekhar Azad was arrested with 95 others.

The Dalit group is questioning the delay in the process of rebuilding the temple. They said that since the Delhi government has already passed orders regarding the same and ruling BJP government has also extended its support o the matter, then why the temple is not getting rebuilt.

Other parties such as Congress and Shiromani Akali Dal have also come in the support of Ravidas community. Even Muslim factions such as All India Muslim Personal Law Board and Anjuman-e-Haideri have backed the movement led by Bhim Army.

In a case titled ‘Guru Ravi Das Jayanti Samaroh Samiti vs Union of India’, Supreme Court on August 9, held that Raviadsia community has committed a breach of its orders by not vacating the forest area in Tughlaqabad. Following the orders, DDA (Delhi Development Authority) demolished the structure on August 10.