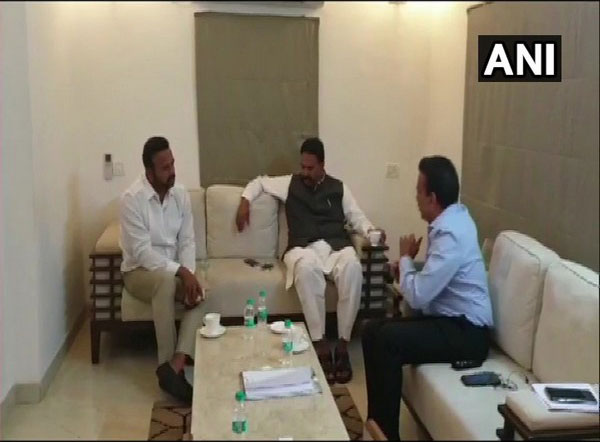 Congress MLA Jaykumar Gore on Friday met State Water Resource Minister Girish Mahajan in Mumbai. The meet came on the backdrop that Gore is likely to change side and may join BJP.

Gore on the occasion was accompanied by BJP MP Ranjitsinh Naik Nibalkar. However, Gore claimed that the meeting was not about him joining the Bharatiya Janata Party.

Jay Kumar Gore’s office in a statement stated that speculations that his meeting was in connection with him joining BJP are false, the meeting was not for that purpose.

Gore is two time MLA from Man Vidhan Sabha. He had in 2009 contested as an Independent while in 2014 he contested on Congress Ticket.

This also came amid speculation of Congress–NCP merger in the state. However, Leaders of both the Political Parties have maintained that there are no such talks taking within the party.

Both – Congress and NCP – have forged an alliance in the state to national polls. However, the alliance faced a humiliating defeat by the BJP–Shiv Sena combine. In the state that sends 48 MPs to the Lok Sabha Polls, NCP-Congress could only bag 5 Lok Sabha Seats with NCP winning 4 seats while one seat won by the Indian National Congress.

Speaking on the issue of a merger between the two parties, Maharashtra Congress Chief Ashok Chavan said that he is not aware of any such development.

State Polls in Maharashtra is slated for later this year.