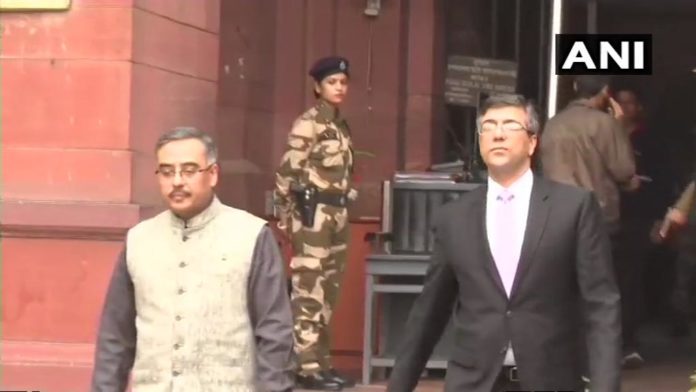 India on Friday registered a strong protest against Pakistan as its High Commissioner to India Sohail Mahmood was summoned by Foreign Secretary Vijay Gokhle in connection to the Pulwama Terror attack that claimed lives of at least 40 CRPF Personnel.

Sources: Foreign Secretary conveyed that Pak must take immediate&verifiable action against JEM and that it must immediately stop groups or individuals associated with terrorism operating from its territories. He also rejected Foreign Ministry of Pakistan statement of yesterday.

Earlier on Thursday, Ministry of External Affairs in a statement slammed Pakistan. MEA in its release said, ‘The Government of India condemns in the strongest possible terms the cowardly terrorist attack on our brave security forces in Pulwama, Jammu & Kashmir earlier today (14 February 2019). This heinous and despicable act has been perpetrated by Jaish-e-Mohammed, a Pakistan-based and supported terrorist organisation proscribed by the United Nations and other countries. This terror group is led by the international terrorist Masood Azhar, who has been given full freedom by Government of Pakistan to operate and expand his terror infrastructure in territories under the control of Pakistan and to carry out attacks in India and elsewhere with impunity’.

The Statement added, ‘We demand that Pakistan stop supporting terrorists and terror groups operating from their territory and dismantle the infrastructure operated by terrorist outfits to launch attacks in other countries.’

MEA in its release also added, ‘We strongly reiterate our appeal to all members of the international community to support the proposal to list terrorists, including JeM Chief Masood Azhar, as a designated terrorist under the 1267 Sanctions Committee of the UN Security Council and to ban terrorist organisations operating from territories controlled by Pakistan’.

Earlier on Friday, India also revoked the Most Favoured Nation Status (MNF) given to Pakistan.

On Thursday, Around 40 CRPF personnel were killed in the deadliest terror attack on security forces in a decade when their convoy was targetted in Pulwama District on Srinagar-Jammu National Highway. The convoy comprised 78 Buses in which around 2500 CRPF Personnel were travelling from Jammu and Kashmir.