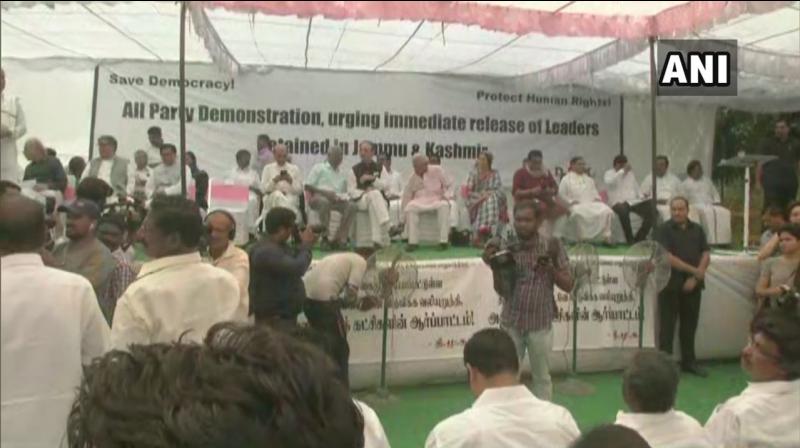 The protest is going on at Jantar Mantar. Other prominent parties such as Congress have also extended its support to the DMK’s protest. Karti Chidambaram is also seen here on the occasion. On 19 August, DMK had announced to hold a protest at Jantar Mantar on 22 August to demand an immediate release of political leaders in the valley.

Earlier in the announcement, DMK MP T R Baalu urged all like-minded parties to join them in the protest. DMK party is demanding the release of leaders who have been detained in the valley. Presently, Former Chief Minister of Jammu and Kashmir Mehbooba Mufti and Omar Abdullah, and Shah Faesal (Retired IAS officer and founder of J&K Peoples movement party) and other leaders have been put under house arrest.

DMK Chief MK Stalin had earlier called the abrogation of Article 370 as a ‘murder of democracy’. He stated that the detention of family members of political leaders in Srinagar is very “unacceptable and unconscionable”. Stalin also accused the BJP government of not following democratic procedures in the Kashmir issue.

Political tensions have been rising since the Union government has repealed Article 370 and divided the erstwhile state into 2 UTs- Jammu & Kashmir and Ladakh. Allegations of ruling BJP acting in a “unilateral manner” have been leveled against the Modi government.