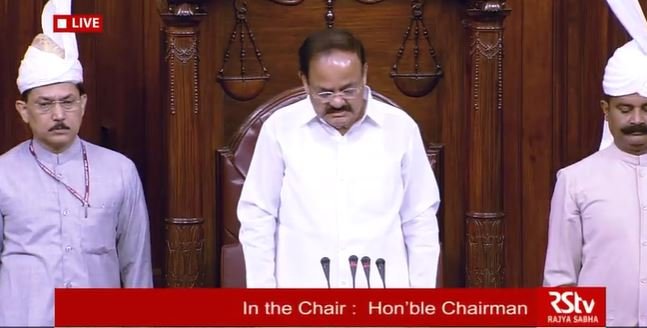 The Upper House of the Parliament, Rajya Sabha, on Wednesday, mourned the sudden demise of former Union Minister and Bharatiya Janata Party (BJP) stalwart Sushma Swaraj, with Chairman M. Venkaiah Naidu saying that she was an ‘able administrator and a true voice of the people’.

Speaking in the upper house of the parliament, Rajya Sabha Chairman Venkaiah Naidu said, “In her untimely demise, the nation has lost an able administrator, an effective parliamentarian and a true voice of people.”

Rajya Sabha Chairman M Venkaiah Naidu and members of the House pay tribute to former EAM Sushma Swaraj. M Venkaiah Naidu says, "In her untimely demise, the nation has lost an able administrator, an effective parliamentarian and a true voice of people." pic.twitter.com/Z8AFGxtop9

In his address, Naidu added that Swaraj was a “sister” to him who used to tie rakhi to him every year. “This year I will be missing this honor,” he said. Following which the Rajya Sabha was adjourned sine die.

Sushma Swaraj had been one of the tallest leaders of Bhartiya Janta Party and was the first woman to hold the full-fledged charge of the External Affairs Ministry.

She had served 4 terms in Lok sabha and had represented Madhya Pradesh’s Vidisha Lok Sabha Seat twice during 15th and 16th Lok Sabha. She also served three tenure in the Rajya Sabha. She also holds the landmarking feat of being the first woman Chief Minister of Delhi in 1998.

Leaders from all over the nation, cut across party lines, have been visiting her residence to pay tribute to the leader and to extend their support to the family. Prime Minister Narendra Modi, BJP President Amit Shah, working President JP Nadda, Rahul Gandhi, Sonia Gandhi, among others visited her residence situated at Dhawan Deep Building situated in the national capital and expressed their condolence over the tragic loss.