NDA’s nominee for Presidential Poll, Ram Nath Kovind, heads towards Raipur, Chattisgarh to meet legislators of BJP and to back their support for the upcoming presidential poll. The meeting was held at Chief Minister, Raman Singh‘s official residence. Finance Minister, Arun Jaitley was also present there. He gave his best wishes to Kovind and hoped that he will get a good number of votes from Chhattisgarh. This meeting lasted for one hour.

BJP has 10 Lok Sabha members out of 11 in Chhattisgarh.

Ramnath Kovind is competing for the President of India post against Congress-led opposition party candidate, Meira Kumar. She will hold a meeting will legislators of Congress and other parties in Bhopal in the upcoming days.

Kovind has been the chairman of the Rajya Sabha House Committee and has served as a member of the Parliamentary Committee on Welfare of Scheduled Castes/Tribes and Social Justice and Empowerment among others. 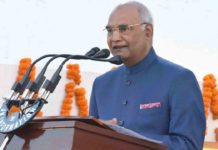