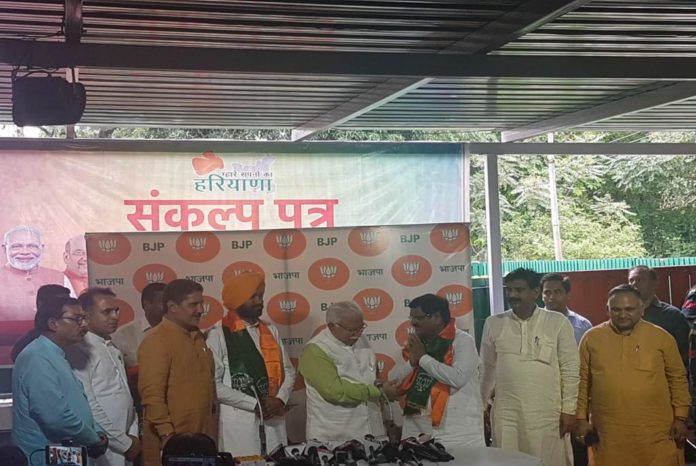 In what can be seen as a fresh jolt to Haryana’s premier Jat political party, INLD, its legislator from Ratia Assembly Seat, Ravinder Baliala, on Thursday joined Bharatiya Janata Party. The development comes months before the state polls in the State.

Speaking to media, Manohar Lal Khattar said good and able people are also welcome in the party’s fold. While BJP State President took to twitter and welcomed both the INLD leaders in BJP.

Baliala represents the Ratia Assembly constituency of the state while Yadav was a minister in Bansi Lal-led government in the 1990s. Both the leaders said they have joined the saffron party ‘unconditionally’.

The switching of sides comes a day before the commencement of the Monsoon Session of the Haryana Assembly, which is expected to be the last before the Haryana State polls, slated for October-November later this year.

The switching of Ravinder Baliala was expected since June as he was holding talks with BJP leaders. It should be noted that Abhay Chautala’s INLD has been decimated after the breakaway of it after feud in Chautala family.

INLD had 11 members in the 90-members Assembly, however, 4 supports Jannayaka Janata Party (JJP), a breakaway faction of INLD. While 6 MLAs have already tendered their resignation. The ruling Bharatiya Janata Party (BJP) has 47 MLAs, while Congress has 17 legislators.

5 legislators are independent, while Shiromani Akali Dal (SAD) and Bahujan Samaj Party (BSP) has one each.

In the national polls held early this year, Haryana’s premier Jat Party, Indian National Lok Dal (INLD) faced a humiliating defeat and lost all 10 contested seats. It only secured 1.89% vote from the state. Bharatiya Janata Party banking on Modi undercurrent again swept the polls by bagging all 10 Lok Sabha Seats of the State.