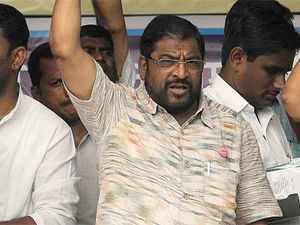 The farmer union based in Maharashtra, the Swabhimani Shetkari Sangathan has proposed to join the Shiv Sena. Their leader, Raju Shetti has said that they are willing to join hands with the Shiv Sena provided they leave the NDA government in the center and also the BJP led state government alliance in the state of Maharashtra.

Shetti had previously threatened to leave the government. This was the first decisive undertaken in the last three months.

“If we will quit from the government, you will not get priority in government offices, your legal works for a public purpose may be stuck by the officials, you may be harassed by the police,” Shetti informed party workers before taking the final decision.

With the recent crisis regarding Maharashtra’s farmers, this statement has taken a greater momentum. With a strong anti- BJP stance the alliance offer has been put up to the Shiv Sena. Condemning the union’s and the BJP led government’s work in the state Shetti commented.

“I had a delusion that the BJP government could take decisions that would benefit farmers and rural India. I was disappointed and hence, opted out of the NDA,”

On the other hand, Rajeev Panday, the national spokesperson of BJP has dismissed the decision by the SSS as ‘expected’, stating :

Shetti announced withdrawal from the union and the state government from that moment. Ravikant Tupkar, a senior leader of the Swabhimani Shetakari Sanghatana and chairman of state-run Maharashtra State Textile Corporation (MSTC) announced to resign from the post on September 4.

In January this year, Thackeray had said his party will go solo in the 2019 Lok Sabha and Maharashtra Assembly polls. The Shiv Sena is yet to give a response on this proposal.