The Indian Wire » Politics » Telangana Assembly Elections : Congress’ ‘maha-kutami’ may fall apart if it does not finalise the seats with its allies by October 21 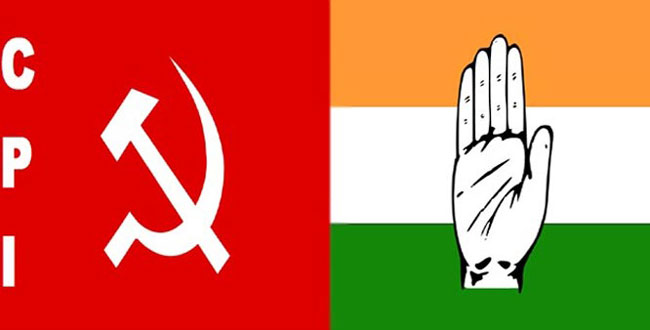 The Communist Party of India has set a deadline of October 21 for the Congress party to finalize the seat-sharing formula for the upcoming Assembly elections in Telangana while hinting that it may contest the elections alone.

Earlier, the Congress, the TDP, CPI and Telangana Jana Samiti (TJS) had announced an electoral alliance for the election to the 119-member Assembly. However, reports suggest that there has been a rift between the parties regarding the delay in finalizing and distributing the seats.

CPI National General Secretary Suravaram Sudhakar Reddy was quoted by PTI as saying, “We can’t wait for them (the Congress) eternally (to finalise seat-sharing).

However, sources from the congress party say that seat-sharing talks among the four constituents have been on. It also said that distribution of seats is driven by “winnability” factor in constituencies.

“On October 21st, our state party executive is meeting. We will decide whether we should go with the alliance or we should decide our own of way of contesting independently”, Sudhakar Reddy said. “We will discuss what is to be done,” he added.

Apparently, leaders of CPI and TJS, are upset over the fact that Congress is delaying the seat-sharing talks. Congress claims that the TDP, CPI and TJS are demanding more seats than their “fair share”.

CPI has already shortlisted 12 seats and talked about it to the Congress from where it would like to contest of which it is keen to contest from nine constituencies.

“We are ready for negotiation…one or two seats less also. (We are ready to settle for) seven-eight (seats),” Reddy said.

Denying any claim of the deadline, AICC In-Charge of Telananga, R C Khuntia said that there is no such threat from the left party and that he had a lengthy discussion with senior CPI leader D Raja last night on the seat-sharing issue.

“Talks are going on (with TDP, CPI and TJS). We will finalise them (seat-sharing talks) very soon”, Khuntia told PTI.

Last Sunday, the CPI had entered into an alliance with Ajit Jogi’s Janata Congress Chhattisgarh (J) for the Chhattisgarh Assembly polls next month.