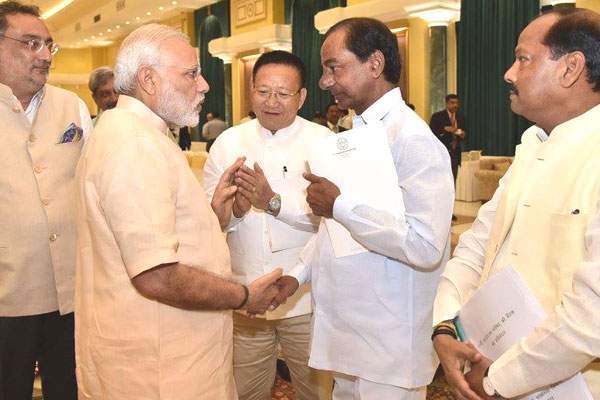 BJP State Chief K Laxman said, “We will support TRS if it drops AIMIM and seeks our support publicly,”. “No party can form the government here [Telangana] without our support,” he added.

Responding on the Congress‘s claim that TRS was always “BJP’s team B”, the state chief said, “Yes, we fought against the corrupt rule and family rule of TRS, but we will support them if we don’t get the numbers.”

Congress National president Rahul Gandhi earlier targetted KCR and urge people not to get fooled by them. He said all three (BJP-TRS-AIMIM) are all ‘alike’.

The Congress had many times during campaign claimed that TRS was always the second option for BJP which is why Prime Minister Narendra Modi never said anything against Chandrashekar Rao and TRS in a run-up to the Telangana Assembly Elections‘ campaign.

The move to forge a post-alliance came after most of the exit polls indicates TRS coming back to power with good numbers.

India Today Axis My India exit poll predicts that KCR is likely to win 79 to 91 seats in the 119-member house. The alliance between the Congress and Andhra Pradesh Chief Minister Chandrababu Naidu‘s Telegu Desam Party (TDP) is expected to win just 21-33 seats in the Telangana assembly election.