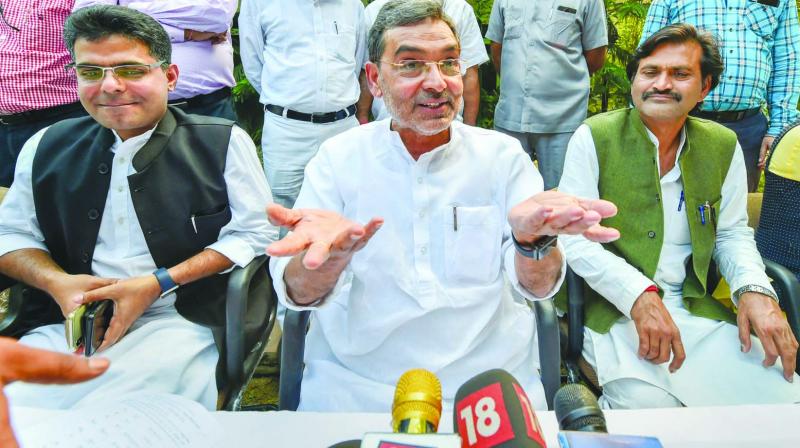 In a big relieve to Rashtriya Lok Samta Party (RLSP) Chief Upendra Kushwaha, the Election Commission on Friday said that Upendra Kushwaha will continue to be a Chief of the party till the Lok Sabha Polls 2019.

In an order issued by the Poll panel, it is stated that ‘Recognition of Rashtriya Lok Samta Party (RLSP) with reserved symbol ‘Ceiling Fan’ shall continue till conclusion of Lok Sabha Elections 2019. Upendra Kushwaha will continue to be recognized as the President of the Party for the purposes of the current election,’ the Poll Body further said.

The Election Commission further said, ‘Group (Faction) led by Lalan Paswan shall be granted interim recognition as State party in Bihar under a name to be indicated by it to Commission immediately. The said group shall also indicate symbol of its choice (giving a choice of at least 3 symbols) from among available free symbols’.

The EC order came after hearing the dispute between two factions of the party – one lead by Upendra Kushwana and other led by RLSP Former MLA Lallan Paswaan. In the Interim Order, the Poll Commission said that faction led by Lallan Paswan is recognised as state party till further notice.

EC: Group led by Lalan Paswan shall be granted interim recognition as State party in Bihar under a name to be indicated by it to Commission immediately. The said group shall also indicate symbol of its choice(giving a choice of at least 3 symbols)from among available free symbols https://t.co/oFwpJitcdT

The Poll Commission will give its verdict on the issue later.

It should be noted that Lalan Paswan, along with its other MLA and single Member of Legislative Council (MLC) Sanjiv Singh Shyam announced to continue with NDA after Upendra Kushwaha snapped all ties with the NDA in December last year.

RLSP fought the 2014 general election as well the 2015 state assembly polls as an NDA ally has altogether three MPs in the lower house, including Kushwaha. However, irked with Seat Sharing, Upendra Kushwaha announced his disassociation from the NDA faction and joined Congress-RLD’s United Progressive Alliance (UPA).

RLSP who has been offered 5 Parliamentary Seat under a poll pact of RJD and Congress in Bihar has already declared candidates on all 5 allotted seats.