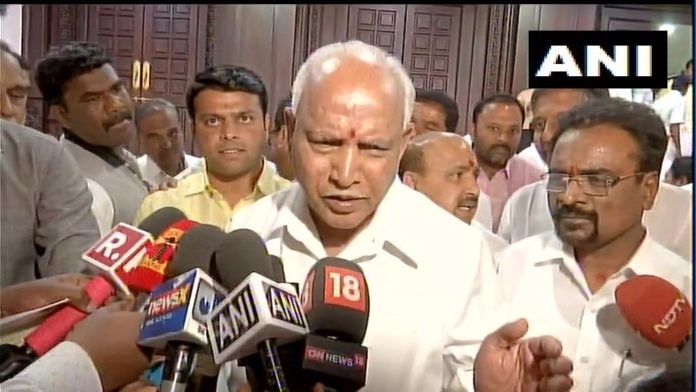 Speaking to the media at Sambra airport in Belagavi on Sunday, Karnataka Chief Minister BS Yeddyurappa told that his cabinet expansion will take place at a later date in the wake of floods in the state.

The Chief Minister told media that he will make a decision only after discussing it with the Delhi high command. He apprised media about his meeting with Home Minister Amit Shah which is scheduled to take place on 16 August. BS Yeddyurappa will visit Amit Shah on the mentioned date for discussing the flood situation. The meeting is also likely to see Yeddyurappa asking for financial aid to tackle the situation and a discussion on cabinet expansion.

On being asked about his cabinet plans, he told media that, very soon everything will be out in open. For now, the party has selected the names of party leaders in Karnataka that have been shortlisted for the ministerial posts. The party is said to have informed BJP about the decision. He also assured that the ministerial positions will be filled while taking proper consideration of all the castes and regions.

Earlier on Saturday, Amit Shah undertook an aerial survey of the flood-hit areas in Karnataka. It was expected that the decision of the cabinet will be cleared out by Sunday. But due to the flood crisis, Home Minister directed the Chief Minister to focus on flood relief measures. Therefore now the cabinet expansion decision is slated to for 16th August.

Hitting the untimely decision of cabinet expansion, Former Chief Minister Siddaramaiah advised BS Yeddyurappa to not handle the flood situation alone as he is unable to pull it off. He said that BS Yeddyurappa should immediately expand his cabinet and appoint at least 20  ministers ad district in-charge for flood-affected areas.

There should not be any politics in this distress situation. It will be very difficult for @BSYBJP to act alone & is quite impossible to ensure justice in all the departments. I urge him to immediately form the cabinet & make ministers in-charge for each district.
n/n