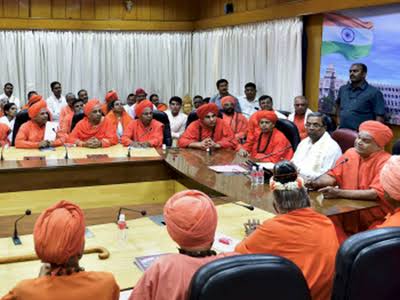 Who are the Lingayats?
The Lingayat/Veerashaiva community, a politically dominant group in Karnataka, are devotees of Shiva.

The Lingayats follow 12th-century saint-philosopher Basavanna who had rejected ritualistic worship and pre-eminence of the Vedas. The Veerashaivas sect of the community also worships Shiva idols and practises other Hindu customs. The Lingayats consider the Veershaivas to be part of Hinduism as they follow Hindu customs while the Veerashaivas think the community was an ancient religion established by Shiva and Basavanna was one of its saints.

The community has a strong presence in the state especially in the north. Lingayats constitute 17% of the total population in Karnataka. They are dominant in close to 100 of the 224 assembly seats, mostly in North Karnataka. There have been nine chief ministers from the community.

Origin of this Issue :
The community has been demanding status of a separate religion for a long time. The issue came at the centrestage last year when Chief Minister Siddaramaiah promised to consider the demand.

One part of the community demands the minority status for both Veerashaiva and Lingayats considering them the same, while another wants it only for the Lingayats as it considers Veershaivas to be Hindus.

The politics behind the move
Coming right before the state assembly elections in May, the move is seen to be aimed at dividing the community which has been voting for the Bharatiya Janata Party (BJP) for long. The BJP’s tallest leader in the state and former chief minister, B.S. Yeddyurappa, belongs to the community. The Congress government in the state will lob the ball in the Centre’s court when it sends the proposal to it for final approval. Any action or delay by the Centre will impact the BJP’s prospects in the elections.

So far, the BJP has mostly kept quiet on the issue. Yeddyurappa had said last year in a rally that there was no difference between Veerashaivas and Lingayats and they were very much part of Hinduism.

The Congress move aims to divide the votes BJP would rely on to win the election. Many, however, think the community might still vote for the BJP despite the move.