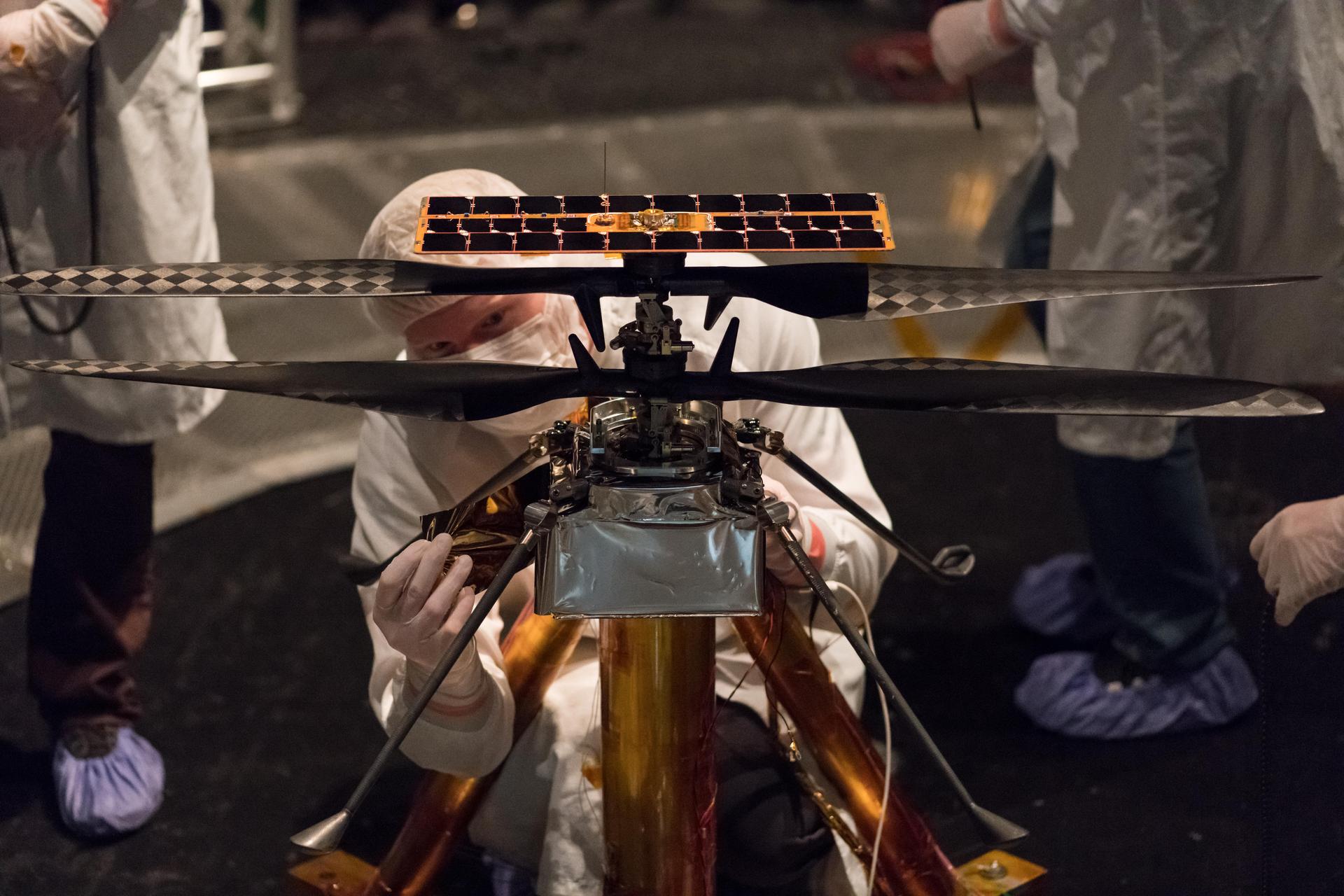 For some time now, NASA’s Ingenuity Helicopter has quite been a celebrity. It has received an apt coverage: right from ‘abrupt’ landing, holding on to Perseverance rover, to the first selfie on planet Mars.

But the upcoming challenges on the face of this mini robotic helicopter are more thrilling to the core.

Let’s know about Ingenuity to know what it’s going to achieve.

Ingenuity Helicopter hopes to make the first attempt at powered, controlled flight of an aircraft, from take-off to landing, on another planet, lest alone Mars. It is already the first aircraft to be deployed on Mars.

It is a part of NASA Mars 2020 mission and hopes to serve as technology demonstrator for the potential use of flying aircraft probes on other planets in our Solar system.

According to director of the Planetary Science Division at NASA Headquarters. “Aptly named, Ingenuity is a technology demonstration that aims to be the first powered flight on another world and, if successful, could further expand our horizons and broaden the scope of what is possible with Mars exploration.”

Previous technology demonstrations include the Mars Pathfinder rover Sojourner and the tiny Mars Cube One (MarCO) CubeSats that flew by Mars in 2018. 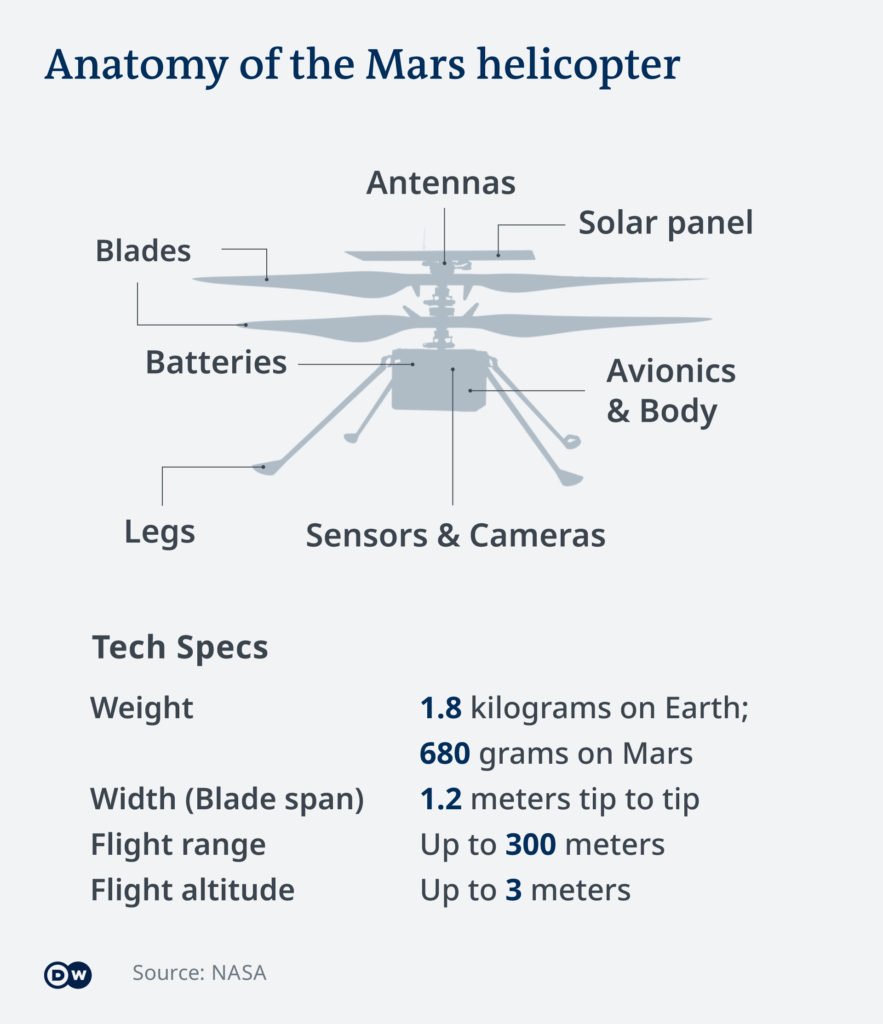 About the design and more specifications of Ingenuity, click here.

Several milestones have already been achieved by Ingenuity:

2. Safely deploying to the surface from Perseverance belly

4. Autonomously charging itself with its solar panel

The Perseverance rover on whose belly Ingenuity is fixed to, is expected to drive approximately 100 m (330 ft) away from the drone to allow Ingenuity a safe “buffer zone” in which it will attempt to fly i.e. a 33-by-33-foot (10-by-10-meter) patch of Martian real estate chosen for its flatness and lack of obstructions.

It will then have to fly up to five times during its 30-day test campaign scheduled early in the rover’s mission, meanwhile communicating directly with the Perseverance rover after each landing i.e Ingenuity plans to attempt a series of 90 second flights while separated from Earth by 10 light minutes.

Its flights will be telerobotically planned and worked by operators at the Jet Propulsion Laboratory (JPL) using autonomous control of the flight. Therefore, it has a sequencing engine on board wherein a series of commands have been appended to a file. The file thus, has been uploaded to the Helicopter that executes commands when necessary.

According to MiMi Aung, Project manager for Ingenuity Mars Helicopter at JPL: “There are no science instruments onboard and no goals to obtain scientific information. We are confident that all the engineering data we want to obtain both on the surface of Mars and aloft can be done within this 30-sol(Martian-day) window.”

“Our plan is to work whatever the Red Planet throws at us the very same way we handled every challenge we’ve faced over the past six years – together, with tenacity and a lot of hard work, and a little Ingenuity”.

How flying on Mars is an achievement while we can do so on Earth?

Mars is a complicated but interesting planet, everything on it is complex already. Flying in a controlled manner is far more difficult on Mars, than on Earth.

The Red Planet has significant gravity (about one-third that of Earth’s) that can help in flight but its atmosphere is just 1% as dense as Earth’s at the surface or say 99% less dense as Earth, requiring the blades to spin faster than on Earth to stay afloat. Apart from these challenges, balancing the power requirements and the communication difficulties will continue to linger.

Only about half the amount of solar energy on Earth is received by Mars during its daytime, and with chilling nights, the temperatures can drop as low as minus 130 degrees Fahrenheit (minus 90 degrees Celsius), thereby freezing and cracking unprotected electrical components.

Therefore, to survive the frigid Martian nights, it must have enough energy to power internal heaters.

To fly in the Mars environment, Ingenuity must be lightweight and so, it is barely 1.8kgs.

Its body is the size of a box of tissues, slung underneath a pair of 1.2m carbon fiber rotors on top of four spindly legs.

Astrobiology i.e. searching for signs of ancient microbial life on Mars is its very purpose.

It hopes to do so by characterizing the planet’s geology and past climate, consequently paving the way for human exploration of the Red Planet, and be the first mission to collect and cache Martian rock and regolith (broken rock and dust).

It is being fuelled by electrical power by using heat of plutonium’s radioactive decay.

As a tribute, small piece of the wing covering from the Wright brothers’ 1903 Wright Flyer, the first powered aircraft on Earth that was carried by Neil Armstrong in 1969, is attached to a cable underneath Ingenuity‘s solar panel.

“The ingenuity and brilliance of people working hard to overcome the challenges of interplanetary travel are what allow us all to experience the wonders of space exploration. Ingenuity is what allows people to accomplish amazing things.”