As expected, Mohammad Shami and Amit Mishra were unavailable for selection due to respective injuries. At the same time, there was no word on Rohit Sharma’s fitness after he was injured while paying ODIs against New Zealand.

The squad announced today is same as that of the one which played Bangladesh in one-off test match in Hyderabad last week. Karun Nair has been kept as the backup in middle order, the slot which is empty die to an injury to Rohit Sharma. Kuldeep Yadav also retained his slot after an injury had ruled out Amit Mishra from the test against Bangladesh. 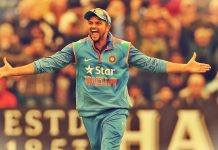 IPL schedule likely to be from September 19 to November 8