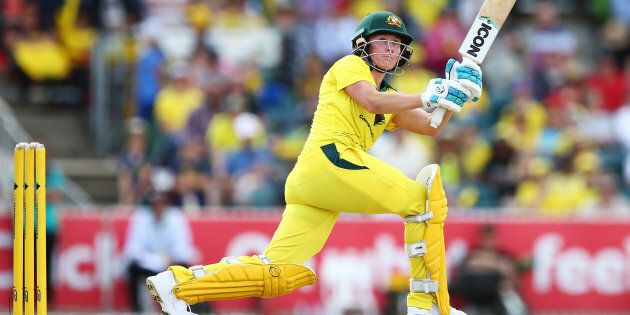 Beth Mooney’s brilliant half-century proved the difference as Australia beat New Zealand by four runs on Monday to qualify for the semi-finals of the ongoing Women’s T20 World Cup.

Mooney’s 60 runs from 50 balls, including six fours and two sixes, helped Australia post 155/5 with the White Ferns requiring the highest successful chase of the tournament to win at Junction Oval.

New Zealand, who have made the semi-finals once since 2012, fell agonizingly short as their top-order struggled for the third successive game.

Megan Schutt returned with figures of 3/22, but Georgia Wareham (3/17) was the pick of the bowlers after taking the crucial wickets of Suzie Bates, Sophie Devine and Maddy Green to set Australia on their way.

Earlier, it was far from the start the hosts would have wanted as star opener Alyssa Healy fell cheaply when she hit in-form Hayley Jensen straight to Amelia Kerr at mid-wicket.

But the second-wicket partnership of Mooney and Meg Lanning quickly put them back into control, the pair hitting five boundaries between them to end the powerplay on 38/1.

The skipper was in no mood to settle for singles as she hit back-to-back fours off Anna Peterson’s first two balls but her actions proved over-ambitious as her top-edged sweep was caught by Lea Tahuhu at short fine leg for 21.

With Healy and Lanning gone, Mooney was left to steer the ship and she did so in remarkable fashion, blasting two sixes over mid-on followed by hitting successive boundaries in the 13th to grab her half-century.

The Australian celebrations were short-lived, however, as Leigh Kasperek bowled Ashleigh Gardner for 20.

Mooney then fell in the 18th over when Bates took an excellent tumbling catch at long-on off Peterson to end her stay in the middle.

Ellyse Perry made 21 before being stumped by Rachel Priest on the penultimate ball while 19 from Rachael Haynes helped the hosts set a high chase.

Priest powered White Ferns into a promising start, hitting three boundaries in the first three overs but the opener was sent packing in the fourth when Jess Jonassen trapped her lbw for 17.

It was a steady start from Devine and Bates but a mis-field allowed Bates to bring much-needed momentum to the chase with two boundaries in the seventh.

But Bates once again fell short of her well-known potential as she was dismissed lbw by Wareham for 14 in the next over.

The hosts did well to restrict their opponents but were dealt with a blow when Perry was forced off the field after sustaining a hamstring injury.

Wareham’s second wicket may just prove her biggest yet as she dismissed Devine for 31 thanks to Healy’s quick reaction with the gloves, leaving New Zealand’s middle-order under pressure.

Two sixes from Green helped lower the required run-rate but she was the next to fall victim to Wareham’s canny bowling when Healy stumped her for 28.

The introduction of Kerr, who set up a thrilling finale against India with her bat, couldn’t turn things around as the 19-year-old was bowled by Schutt for two before Jensen was caught by Nicola Carey at mid-off first ball.

Australia have joined India from Group A in the semi-finals while England and South Africa have qualified from Group B.