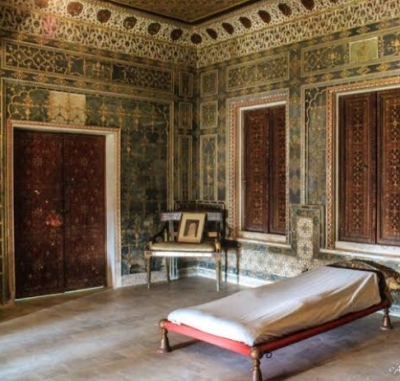 It was my second visit to Bikaner and the magnificent Junagarh Fort drew me like a magnet. A visit to the fort takes at least an hour and a half, for there is much to see. Junagarh Fort is one of Rajasthan’s few forts, which are not built on a hilltop. The modern city of Bikaner has grown and developed around the fort.

Before the present Junagarh Fort was built, an old stone fort existed in the city. The

exisiting fort was built in 1478 by Rao Bika, who established Bikaner in 1472. As the second son of Maharaja Rao Jodha, the founder of Jodhpur, Bika knew he had no chance of inheriting his father’s territory or the title of Maharaja. So he decided to create his own kingdom and conquered large arid lands in the northern region of Rajasthan, to set up his own domain. The history of Bikaner and the fort within thus starts with Bika.

The fort was built in an area then known as ‘Jungladesh’. Historical records reveal that despite repeated attacks by enemies to capture the fort, it was not taken, except for a lone one-day occupation by Kamran Mirza, the second son of the Mughal Emperor Babar, who attacked Bikaner in 1534. Bikaner was then ruled by Rao Jait Singh.

It was however, only about 100 years later, that Bikaner’s fortunes flourished under Raja Rai Singhji, its sixth ruler, who ruled from 1571 to 1611. He accepted the suzerainty of the Mughals and held a high position of an army general in the court of Emperor Akbar and his son Emperor Jehangir. It was during this period that Raja Rai Singh decided to build a new fort.

The Junagarh fort is built on plain land and the formal foundation ceremony was held on 17 February 1589. The fort complex was built over 5.28 hectares of land, under the supervision of Karan Chand, the prime minister of Raja Rai Singh. The construction of the walls and the moat began in 1589 and the fort was completed on 17 January 1594.

Raja Rai Singh was artistic inclined and had a sound knowledge of architecture — acquired from sojourns to several countries. This knowledge is reflected in the numerous structures that he built in the Junagarh fort. The fort is thus considered an outstanding example of architecture and a unique centre of art.

Its large precinct is studded with palaces, temples and pavilions — buildings that depict a combination of culture, through a mix of architectural styles. The exquisitely carved exterior in red sandstone and the interior palaces and chambers in carved marble, make the fort a delight.

Polished plaster with raised moulding, and gilded and painted walls and ceilings all come together to create the incomparable Karan Mahal and Anup Mahal. Anup Mahal, which served as the Diwan-i -Khas, has been mentioned as the most ornate coronation chamber in Asia. While typically Rajasthani elements like coloured glass and mirrors are used to embellish the ornate Crescent Room, the more recent decorative elements at the fort include the unusual choice of China tiles of the famous ‘Willow Pattern’ on the balconies and walls.

Another interesting part of the palace is Maharaja Lal Singh’s Music Room, with the monarch’s musical instruments still preserved exactly the way he had last played them. The walls of the room are painted with blue and white clouds, interspersed with flashes of orange lightning, while the niches in the walls depict monsoon ‘ragas’ in traditional Rajasthani miniature style.

Ganga Singh, who ruled from 1887 to 1943, built the Ganga Niwas Palace, which has towers at the entrance. This palace was designed by the famous architect Sir Samuel Swinton Jacob. Ganga Singh’s contribution to the building activity in Junagarh involved separate halls for public and private audience in the Ganga Mahal and a durbar hall for formal functions. The hall, where he held his Golden Jubilee as a ruler of Bikaner, is now a museum.

Ganga Singh also built Lalgarh Palace, named so after his father. It was also designed by Samuel Swinton Jacob and was located north of the Junagarh Fort. He shifted to this new palace in 1902 and the royal family still occupies a part of the palace.

Ganga Singh was a favourite of the British Raj and earned the title of Knight Commander of the Star of India. He represented the country at the Imperial First World War Conferences, but passed away in 1943 before the war was won by the allies.