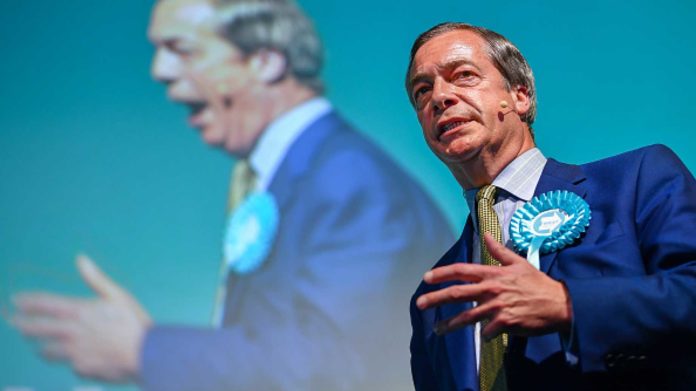 SOUTHAMPTON, England, May 27: United Kingdom (UK) Brexit leader Nigel Farage has on Monday demanded a seat at Brexit negotiations after his newly formed party declared victory in the 2019 European Parliament elections, cautioning if gets denies, he would turn the UK politics upside down.

According to Reuters news reports, Farage won by a flow of wave of anger at the failure of British Prime Minister (PM) Theresa May to withdraw the UK out of the European Union (EU) with a deal.

As PM May’s Conservative Party seeks to choose a new party leader, Farage presented a fresh warning for the new PM: A say in the United Kingdom’s biggest decision since World War Two.

During the poll counting in the southern British city of Southampton, Brexit Party head Farage told Reuters: “We should be part of the team now, that’s pretty clear.”

After consecutive delays to Brexit, he stated the UK had to withdraw from the bloc on October 31 –  the current deadline for Britain to leave the UK. Farage would opt to chose to leave the bloc without any deal.

“If we don’t leave on that day, then you can expect the Brexit Party to repeat this kind of surprise in the next general election,” he said.

France’s far-right head Le Pen has declared victory on Sunday over President Emmanuel Macron as the parties made a heavy gain in the parliamentary elections of the European Union (EU).

Germany’s right-wing Alternative for Germany (AfD)  and anti-immigrants broke 10 per cent, while the mainstream Socialist Party lost its grounds, including the Greem party moving into second place after the ruling centre-right.