As the online classes of DU are going to start from August 10, the university is most likely going to hold a key meeting where the syllabus of the four courses will be decided.

Syllabus for the third and the fifth semesters  for subjects, Political Science, Sociology, History and English is yet to be finalised.  Apprehensions were expressed about how they would be able to start the classes.

Last year, for these subjects a row had erupted over the syllabus, with a right-wing teachers’ outfit alleging that the curriculum was “pro-Left”.

For the first semester, the executive council had referred back the syllabus for four courses to the department. The revised syllabus was submitted to the committee. Maharaj Pandit, who is the chairman stated that a meeting shall be held on Monday or Tuesday for oversight of syllabi.

Pandit said that the respective registrar is looking into the issue. It has been circulated among the deans so that we are able to reach a consensus. Continuous reminders were sent by the professors of English and Political Science  to the oversight committee for the approval of the syllabi.

As per the reports one of the professor from the English department, who has requested for not revealing his identity stated that the syllabus was sent earlier with continuous reminders to the committee regarding the approval. He was looking forward that the committee would not delay and approve the syllabi before August 10.

Veena Kukreja, who is the head of Political Science department, stated that the letter is being written for approval of the syllabus. The syllabi was sent a month ago.

She added to the information that a notice was given from the university in order to send the syllabus for approval of the oversight committee. Before August 10, it must be finalized. 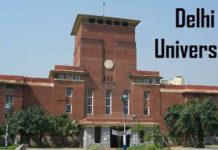