“Your destination is a reward for safe driving”

This is what Goa schools and colleges will be teaching to their students. Goa Education director Vandana Rao on Thursday said the government is focusing on promoting awareness on road safety and inculcating the spirit of harmony and brotherhood as a part of civic responsibilities among schools and college students.

‘Marg Suraksha’ – A grant-in-aid scheme has been introduced by the government in the schools and colleges, she said.

Under the scheme, they will be establishing civic clubs among students, transcending religious, linguistic and regional or sectional diversities to promote harmony and spirit of brotherhood, she further added.

Meanwhile, Goa’s Education Department on Wednesday has instructed all schools in the coastal states to facilitate ‘two water breaks’ daily to ensure students drink plenty of water due to the fear of raising dehydration among students.

These instructions will be applied to every government school, government-aided and private schools – primary, secondary, higher secondary, and special schools.

Goa is not the first state to adopt the ‘Water Bells’ Initiative. The Initiative was started in Kerala which was followed by all the southern Indian states and now is spreading across the country. 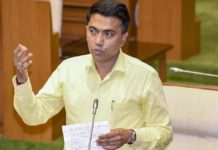