After ‘Khatron Ke Khiladi season 9‘, Television couple Bharti Singh and Haarsh Limbachiyaa are all set to appear in another stunt-based show. Harsh will also turn creative producer with ‘Khatra, Khatra, Khatra’, an adventure and reality-based show, where his wife Bharti will anchor the show along with Aditya Narayan, Vikas Gupta, Jasmin Bhasin and Haarsh himself. “We were always into developing concepts and Bharati and I had many ideas for mainstream GEC shows. This reality show will be about performing stunts in a funny way and to begin with, we hope to explore Mumbai, Delhi and Agra”, said Haarsh.

Both the TV stars work closely and when quizzed about their happy marriage, Harsh replies, ”We met each other on the sets and got attracted to each other because of our common interests in the field of entertainment. So, of course, it is one of the reasons that keep our partnership going.”

Bharti and Haarsh were last seen in ‘Khatron ke Khiladi’, which is the most watched show and garnered more than 8 million impressions, according to BARC India. As the show is still airing on television and reaching towards its finale, Bharti is still one of its contents while Haarsh was eliminated in initial weeks. 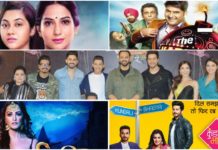