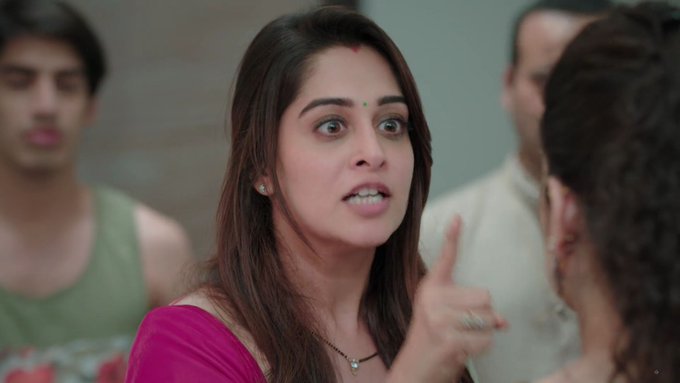 The recent episode of Kahaan Hum Kahaan Tum, begins Rohit helps to comfort Sonakshi. The hospital finally manages to find Pooja’s blood group and Veena is grateful that now she’ll respond to the treatment. Sonakshi offers water to Naren and he accepts it. Rohit tells YK that Pooja is in a stable condition.

Suddenly, police arrives in the hospital and demands to know the identity of the suicide case patient. Sonakshi tries to intrude, but the police inspector talks disrespectfully to her. Rohit defends his wife and tells the inspector to treat her with respect.

Tapasya arrives with her media crew and begins to ask questions about why the whole Sippy family is present at the hospital. Sonakshi quickly comes with a lie: She tells Tapasya and everyone else that her mother, who is a heart patient has been admitted for treatment. Tapasya tries to expose Sonakshi’s lie but Suman hears her daughter’s words and moves away from everyone’s gaze.

Sonakshi tells the police they can’t meet Suman because she has just undergone an operation and is resting. The police berate Tapasya for wasting their time. Angered by Tapasya’s various attempts to reveal Pooja’s identity, Sonakshi slaps her and tells her to get out.

Finally, the family can focus on Pooja, who wakes up. YK goes in her room and tries to ask why she attempted to take her own life but he’s interrupted by someone’s arrival. Nishi, his wife.