Akshay Kumar starrer Mission Mangal drops its official trailer on YouTube today. The film is directed by Jagan Shakti and is based on a true story. Along with Akshay, the trailer has glimpses of Sharman Joshi, Dalip Tahil and a female army to stand by and support Rakesh Dhawan (Akshay Kumar). The army is led by Tara Shinde (Vidya Balan), followed by Sonakshi Sinha, Taapsee, and many more.

Mission Mangal is about the incredible story behind India’s mission to Mars. The team at ISRO succeeds in sending a satellite to Mars in their very first attempt. By the first look of it, the trailer has the audacity to give you goosebumps and overwhelm you with the feeling of patriotism.

Watch the trailer below and or head over to FoxStarHindi on YouTube. 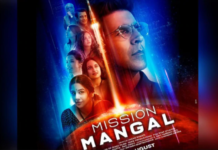 Mission Mangal releases its first track “Dil Mein Mars Hai” on YouTube; will fill you up with pride